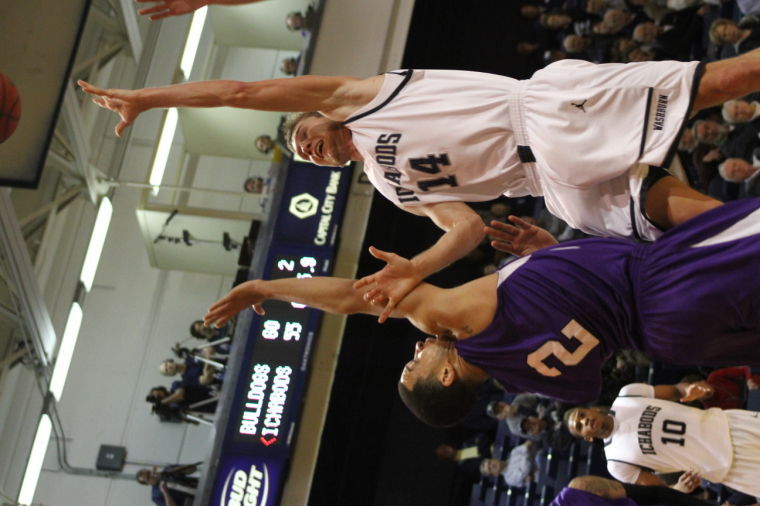 Washburn's Christian Ulsaker tries to finish at the hole against a defender earlier this season.

The Washburn Ichabods lost to the University of Central Oklahoma earlier in the season when the two teams met and WU was ready to avenge that loss. However, the Bronchos had other plans in this MIAA Tournament quarterfinal matchup. UCO eliminated the Bods, 99-88.

“It seemed like we were always catching up,” said Bob Chipman, Washburn head coach. “They were hitting a bunch of shots and I thought they played great.”

Will McNeill had 19 points in the first half, including a three-pointer at the end of the half to tie the game 43-43. Kyle Wiggins was 2-2 from long range as he had 10 points. UCO shot 48 percent from the field in the first 20 minutes, going 15-31. WU went 18 of 36, making 50 percent of their shots. Washburn recorded 17 rebounds, while Central Oklahoma grabbed 18 boards.

Central Oklahoma kept Washburn at bay, holding a slight lead throughout the second half. The biggest lead for the Bronchos was 12 with 3:41 left in the game. A three-pointer by Wiggins put the Bods within nine with 3:40 left. With the teams trading chances at the free-throw line, WU kept within nine until UCO got a lay-up with 2:04 left. A personal foul by Mitchell gave UCO two free-throws that they made, but a technical foul by a UCO player put McNeill on the line and he split the free-throws. A three by Ulsaker made it an eleven point game, 91-80, with 90 seconds left. Washburn traded one free throw for a three-pointer by Mitchell, cutting the lead to nine with 1:18 left. UCO made one free-throw, and Wiggins went down and got a lay-up with one minute left. Mitchell answered a made free-throw with another three-point bucket and made it an 11 point game with 50 seconds left. The Ichabods got the game within seven, but turnovers and UCO free-throws allowed the Bronchos to hold off a Washburn charge, winning by 11.

Washburn finished the game going 28 for 63 from the field. Their 44 percent was short of the 49 percent of Central Oklahoma. The Bronchos were 28 for 57 from the field and 40 percent from three-point land. Wiggins went 3-4 from beyond the arch, as the team went 48 percent, 11 for 23.

McNeill was the leading scorer in the game, recording 34 points. He was 8-15 from the field and made 16 of his 17 free-throws. Bobby Chipman fouled out of the game with 3:31 left in the game and he had nine points, eight rebounds.

Spencer Smith was the leading scorer for the Bronchos with 27 points. He was the only player in the game with a double-double as he grabbed 10 rebounds.

The early round exit cost Washburn, who was sitting at eighth in the Central, a chance to go to the Division II NCAA tournament. The Ichabods, who started off the year ranked in the top five, will end with their season with a 19-8 overall on the season, 12-6 in the MIAA conference.