Kitowski and Konkel debate in Mabee 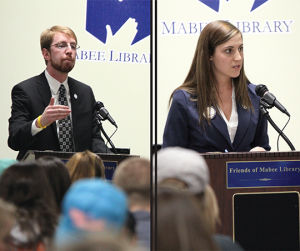 Free pizza and t-shirts lured students into Mabee to listen to the debate. Assistant dean of libraries Sean Bird moderated the debate, and opened the night with a few jokes.

“I love moderating,” said Bird. “The candidates seem a bit nervous, but what 21-year-old running for student body president wouldn’t be? We have 7,000 students on campus. It’s a big deal.”

Konkel, a junior political science and history major, won the coin toss to start. Konkel and Kitowski each had their fare share of platform ideas, some of which overlapped. Konkel explained her idea of improving accessibility, while Kitowski opened with a “simple platform.”

“I don’t want to play a political game,” said Kitowski.

Konkel emphasized her platform of accessibility throughout the debate, and both candidates said they wanted WSGA to reach out to students more, instead of students having to seek student government out.

“We want people to come visit us, ask us what we can do to help,” said Konkel. “We want to be there to listen to them.”

Konkel also discussed efficiency within WSGA, and outlined an idea for improving the WSGA funding process.

“The current funding policy is confusing and complicated,” said Konkel. “We want to create an online platform for student funding. It would look sort of like a Pandora application screen.”

Kitowski spoke quite a bit about the iAlert program, and his idea of making it an opt-out program. He also discussed expanding the iSave program, and adding two more printers to the Mabee Library.

“I also want to expand the hours of Study Grounds, the coffee shop in the library,” said Kitowski. “We want people to get their coffee kick at 1 a.m., and get their studying done.”

Both candidates expressed professionalism during the debate, and echoed that idea when discussing representing students on an upper-administration level.

“I’m not afraid to talk to the upper administration,” said Kitowski. “They’re people, like you and me.”

“I feel that I have a responsibility greater than myself,” said Konkel. “I want students to hold me accountable to their best interests. I have to be flexible… I am a student, first and foremost.”

Both Konkel and Kitowski had their own unique vision of what Washburn campus would look like in 10 years. Each were asked what they imagined campus was like after a decade had passed.

“I see enrollment being up, I see a more involved student body,” said Kitowski. “Students will want to be on campus.”

Konkel said that, while the “campus will physically be different, the traditional atmosphere will be continued.”

“We have an obligation to maintain what it means to be an Ichabod,” said Konkel.

After the moderated questions, Bird collected questions sampled from the audience, and forwarded them to the candidates. Those questions involved measuring success, determining WSGA’s role in supporting student organizations, and keeping their executive staff motivated.

“If you have a true, passionate love for Washburn like I do, then it’s not difficult to keep students motivated,” said Kitowski. “I’ll make my executive staff work for students, and have the same passion for Washburn.”

In their closing remarks, both Konkel and Kitowski encouraged the audience to vote, either online through their MyWashburn account, or at voting booths set up across campus. At the end of the debate, WSGA speaker pro tempore Brett Johnson thanked everyone for coming, and gave the candidates a send-off from “The Hunger Games.”

“May the odds ever be in your favor,” said Johnson.