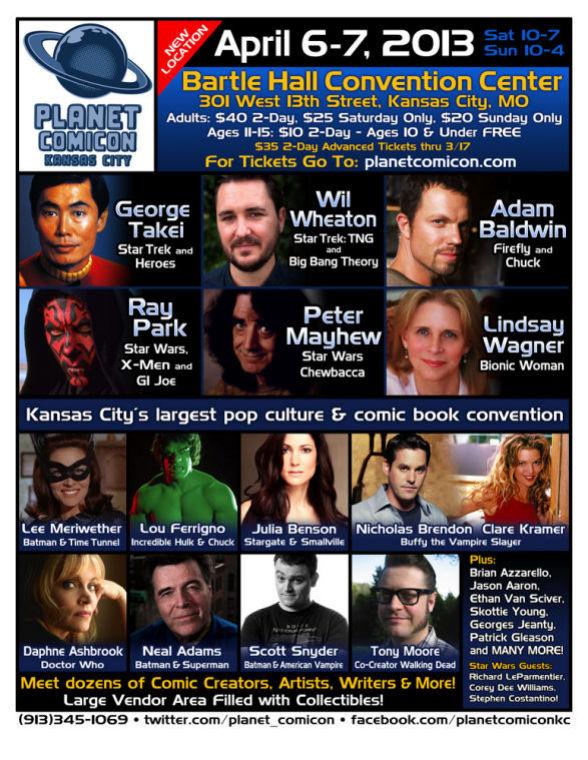 At least that’s what Chris Jackson and his army of volunteer organizers are planning for this year’s Planet Comicon, the area’s premier comic book and pop culture convention. This year, the con’s 13th, boasts an impressive move, as it leaves the familiar confines of the Overland Park International Trade Center (which it had outgrown in the last two years) and relocates to the larger Bartle Hall Convention Center in Downtown Kansas City.

One of those volunteers is Kirk Chitton, Panel Coordinator and Marketing Consultant for Planet Comicon.

“I’ve been involved with Kansas City comics conventions since 1989, and Planet Comicon for the past five years,” said Chitton. “This year’s show is going to be the biggest comics event we’ve ever seen.”

Fans should be excited over comic legends Neal Adams from “Batman” and “Superman;” writer Scott Snyder from “Batman” and “American Vampire;” and artist Tony Moore from “Deadpool” and “The Walking Dead” are just the tip of the iceberg of over 150 creator guests.

“Last year it was obvious that Planet Comicon had outgrown it’s old location, but moving to Bartle Hall was a huge step. The convention organizers knew that we would have to pull out all the stops to bring in thousands of additional attendees, so we focused more on celebrity guests than ever before,” said Chitton. “Each announcement of a major guest has ramped the excitement even further. We released the news about booking George Takei and Wil Wheaton just a few days apart, and that made everyone sit up and take notice. Nobody could ignore that Planet Comicon is a must-attend event for anyone who likes comics and science fiction movies and television. The fan response so far has been truly astounding.”

Special attractions at this year’s con include a street-legal faithful replica of the DeLorean Time Machine as seen in the film “Back To The Future,” Topeka’s own “Doctor Who” podcast “Traveling The Vortex” will be conducting a live podcast during their panel, Certified Guaranty Company will be grading attendees’ comic books, gaming and over 60 exhibitors and dealers with a room full of collectibles.

Costume contests have been a part of the festivities for years, but this time there’s an added bonus.

In addition to the contest awarding up to $3,000 in cash prizes, Planet Comicon will host the Syfy channel and their new network series “Cos World,” which will shine a spotlight on the phenomena known as Cosplay. Anyone attending the con in costume has the opportunity to be featured on the show, which will have a worldwide audience. Planet Comicon runs Saturday and Sunday, April 6 and 7. While advance ticket sales have ended, tickets will be available at the door, $40 for the weekend, less for individual days.

For prices, times, guests and a complete schedule of events, check the Planet Comicon website www.planetcomicon.wordpress.com, facebook.com/planetcomiconkc or twitter.com/planet_comicon.