Wiz of a wiz, if ever a wiz there was 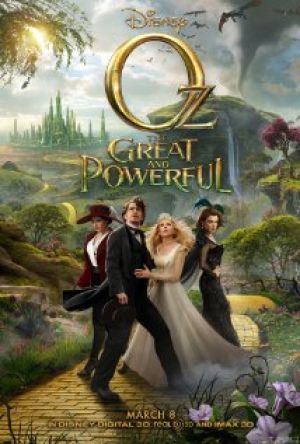 battle over 2013 box office: “Oz, The Great And Powerful.” I’ll admit to some early trepidation, as it’s brought to us by the same producers and studio as the most recent version of “Alice In Wonderland,” which Tim Burton directed, and in my opinion fell flat. It looked cool, but didn’t move me beyond that.

than magic man. He has aspirations of being Thomas Edison and Harry Houdini rolled into one, but really is just a two bit thief. After getting caught wooing the girl of the carnival strong man and making a hasty retreat via hot air balloon, Oscar gets swept up in a tornado and is magically transported to the land of Oz, where a prophecy has foretold of a great wizard that would fall from the sky and free the land from the evil and the wicked witch. And yes, there are some visual similarities to Wonderland in Oz, but the good news is here’s where the comparisons stop.

After traveling to the Emerald City, and meeting some new friends (Zach

Braff as the land’s only friendly flying monkey Finley, and 13 year old Joey King as the most adorable creation this side of Puss N Boots, China Girl) Oscar sets off to fulfill the prophecy to save Oz from the Wicked Witch. He also becomes embroiled in a love triangle of sorts with three witches, Theodora (Mila Kunis), Evanora (Rachel Weisz) and Glenda (Michelle Williams), none of whom are sure the wizard is all the prophecy made him out to be.

I know there are complaints about the acting being over the top and most of the characters around Oscar feel very vaudevillian as well, but I submit that with a theatrical background in carnival, Oscar should be played that way. These are over the top characters and situations (we are talking about witches and wizards, after all).

Oz is a magical place, full of spectacle and wonder. On the surface, Sam Rami (Spider-man, Evil Dead) seems an odd choice to direct that spectacle. But he does it with aplomb, filling the movie with many “Rami cam” moments that work, and creates something truly artful. So many of the Oz “re-visitations” that have come lately have reinvented the story, or twisted it to better fit the needs of the new format (see Sci-Fi channel’s Tin Man, which started off great and slowly descended into something wonky). But not here. For a long while “Oz, The Great and Powerful” seemed to be walking the tightrope between being yet another empty, vapid, effects filled big budget film that was marketed to our heart strings, versus the warm glow of returning to the familiar and telling a new story. Rami’s deft direction allows Oz to really feel like a voyage over the rainbow.

overblown, big budget Hollywoodized modernization/prequel of a classic, I kept slipping into nostalgia mode. The movie made me remember and feel like I do when I watch MGM’s original “The Wizard Of Oz.” I feel that if it can evoke those feelings then I should just let go and let it wash over me and enjoy it. And that may be the films most impressive achievement.

Much of that comes from the homage paid to the classic and iconic images of the original, things this one does in spades. From the opening in black and white, to a few name drops that had me squee with excitement, the film did its homework.

The funny thing is, that moment seems to come once the film settles into

the familiar trope of “will Oscar redeem himself or not?” That’s when it really finds its footing. Not that the preceding is bad by any stretch of the imagination. But there have been so many “anti-heroes” of late that show up in films and are dragged unwillingly to the finale, it was refreshing to see one get there of his own volition.

The true magic of Oz is revealed in the final reel, which I wont ruin here, but

it made me sit up and cheer. By the end of the film, the groundwork has been laid for more, either a sequel to this film (and based on an impressive 80 million dollar opening weekend I’d say that’s assured) or a trip back down the yellow brick road with the original.

In either case, he really is a wiz of a wiz, if ever a wiz there was.