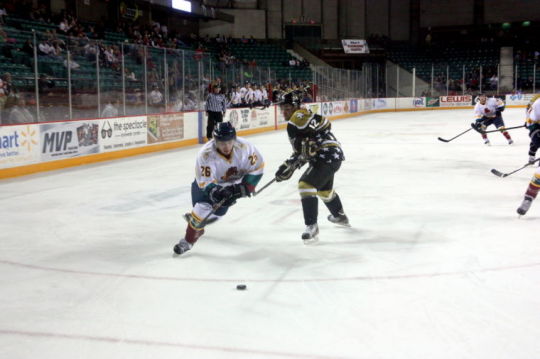 Forward Brandon Brossoit looks to take a shot on goal Friday night. Although Brossoit didn't have a goal in the contest, he had a shot on goal, as Topeka defeated Texas 3-2.

Forward Tomas Nechala had a chance to be the hero Friday night.

He didn’t miss his opportunity.

“It always nice to be able to (set a record) and be happy about and not upset because you lost,” said Sharkey. “It’s nice to get two points as a team and also have your personal (accomplishment.)”

The win came after Texas (35-19-2) tied the contest at two at 16:29 of the third period. Topeka coach Scott Langer said he was happy with Nechala’s grit to make the game-winning goal.

“It’s pretty gutsy the way he went about that,” said Langer. “That’s why we did what we did to bring a guy like that in. It’s a huge goal for him.”

Texas started the scoring just 29 seconds in the second period when forward Andrew Mayer scored a powerplay goal. At 12:01, forward Michael Covach responded for Topeka, poking a rebound past Leisner to tie the game at one. Looking to take the momentum, forward Tyler Andrew scored at 19:47, as Sharkey grabbed an assist on the play for the points record.

Topeka looked to have the game in control until the final minutes of the contest, where Texas tied.

“We played 56 solid hockey minutes, and in the last four we let off the gas a little bit and had some unfortunate luck,” said Langer. “When you turn the puck over a good team, that’s what happens. But the positive was that we found a way to win the game. It was a great night and Kyle Sharkey capped it off.”