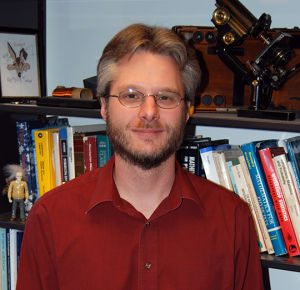 The Weather Channel and the History Channel have both interviewed Brian Thomas about his expertise in astronomy and about his knowledge of disaster scenarios. He is also an associate professor in physics and astronomy at Washburn and a well-known physicist who studies an element called carbon 14.

“Most of my work involves how the Earth is affected by radiation from space,” said Thomas. “Lots of different kinds of events are fascinating. Something recently that my collaborators and I have been looking at [is] what may have caused an observed change in carbon 14 about 774 AD.”

Carbon 14 is an isotope of the element carbon and it radioactively decays over time. It is produced in the atmosphere by high-energy radiation in space and the levels were changed during this time period. Although they aren’t certain, Thomas and his collaborators believe that a solar flare was the cause of this increase in carbon 14.

“We’ve proposed that the best explanation is a solar flair,” said Thomas. “The way that we’ve done that is we’ve inferred from the carbon 14 that’s present, the kind of energy and kind of radiation one would expect. The one that fits the best is a solar kind of event.”

Thomas has loved nature and math since a young age. He remembers spending a lot of time outside and visiting national parks.

“I was always interested in nature,” said Thomas. “I liked doing math and I liked understanding just how things worked at the most basic level and that’s what physics is really about – understanding the most fundamental properties.”

For anyone who is interested in learning about the sciences but isn’t strong in the requirements needed to become a physicist, there are other options.

“There are two ways to approach the sciences,” said Thomas. “One way is to ‘do’ science, and that requires going through a lot of math and a lot of science classes. The other is to approach it from a more conceptual level. Learning about it and understanding it in a more general, descriptive way.”

At Washburn, Thomas teaches both general education level courses and upper-level physics courses. He chose to teach at Washburn because of the small classrooms and because teaching is a top priority. He also gets to teach a variety of students who are on various levels.

“I really enjoy teaching something like astronomy because it’s an introductory course and most people coming in know nothing about astronomy so I get to translate the big ideas into a different language or a different way of describing it,” said Thomas. “I enjoy that and I like translating [the information]. It’s also fun to teach the physics majors too because we can get more into the details. That’s one thing that is a nice balance here is that I get to a little bit of both.”

•AS 101 A, Intro to Astronomy/Cosmology

•PS 335 A, Theoretical Mechanics I

•PS 365 A, Intro to Theoretical Physics

Here is a video on YouTube of one of his lectures, http://www.youtube.com/watch?v=MyZ4-TegFI4