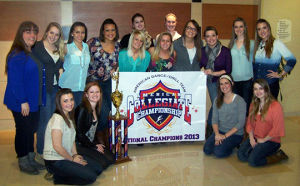 The competition took place in Denton at the University of North Texas. It was hosted by the American Dance/Drill Team organization and featured collegiate dance teams from across the region. Dance teams from 17 states competed in this year’s competition. To earn the national honor, the Dancing Blues were judged on content/choreography, showmanship/presentation, execution/precision and technique.

“Honestly when we won I couldn’t tell you what happened,” said Maggie Isaacson, senior exercise physiology major. “We were screaming really loud and some of us seniors were crying because we’ve been through so much and have never really won anything. It was a moment we will cherish forever.”

The Blues hired Mandy Pruett, a former coach of the KU Rock Chalk Dancers, to choreograph a routine which they used to win a regional competition at Missouri State University last summer, 2012. They then spent nine months polishing the routine before taking it to nationals.

“I absolutely did not expect to win,” said Angie Price, coach. “It’s really hard to know how the judges are going to think. I was in shock but in my opinion they were the best performance.”

The Dancing Blues were first out of eight schools competing in that division. They were also recognized as having the second highest cumulative grade point average of all the Division II teams competing at the event.

Now that the competition is over, the Dancing Blues are preparing for tryouts. Since this is the biggest senior class the Blues have ever had, they are looking for new members.

Anyone interested in trying out does not have to sign up but is expected to come and learn a routine to perform that same day. The judges will be looking for technique, performance ability and execution.

“Dancing Blues is one of the best experiences I’ve had in college,” said Becky Addington, a recent business graduate. “It was a rewarding experience and I’m glad I ended my dancing career with a National Championship.”

Tryouts will be this April 21 from noon to 6 p.m. in room 125 of the Washburn Dance Center. For more information contact Angie Price at [email protected]