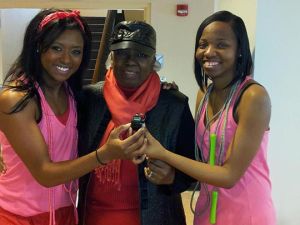 Alpha Kappa Alpha has recently joined Washburn’s campus and they pride themselves in being the first African American sorority, not only at WU, but ever. AKA was founded in 1908 at Howard University in Washington D.C. and came to Washburn last fall.

Friday Feb. 1 AKA went red with their “Pink Goes Red” table in the Memorial Union, with jump ropes and counters. They participated in Jump Rope For Heart and had a goal of 1908 jumps, which they exceeded in less than two hours.

The event is called “Pink Goes Red” because the traditional colors for AKA are pink and green, but for one day they wore red for heart disease awareness. Heart disease kills one in three women every year and the number is higher for African American women, so AKA feels this to be a very important philanthropy.

This spring AKA has many events planned, including Black AIDS Awareness and CAMP AKA.

“The sorority is like family, once you’re a member you are always a member,” said Porchia Brown, junior mass media major. “We might not like each other one part of the day but the next part we get over it. Just like we were actual birth sisters.”

The sorority looks to grow and is actively recruiting members now.

“First you have to express interest and attend events, and then we have a rush, which you come to and get more information about it,” said Brown.

For more information on the organization, check out their Facebook page facebook.com/upsilon.akas or meet them from 11 a.m. to 1 p.m. Thursday, Feb. 7 in the Memorial Union for their Black AIDS Awareness tabling. They will be partnering with the Topeka’s AIDS Project to raise awareness by performing free HIV testing.