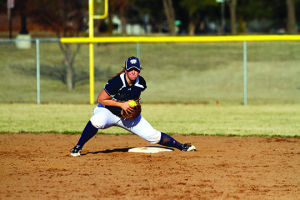 The weather this spring has not been kind to the Washburn softball team.

The Lady Blues have spent a good chunk of their 2013 season cooped up in the confines of the Petro Allied Health Building because of snow and rain. The poor conditions already cost the Blues two games earlier this season. Two of Washburn’s games at the Southeastern Oklahoma State Tournament, against Ouachita Baptist University and the University of Arkansas at Monticello, were canceled because of rain.  Now the Lady Blues might have another doubleheader canceled because of an unusual snow storm that hit the midwest.

The Lady Blues last victory took place on April 6 when they won the first game of their doubleheader with Pittsburg State University. The Blues have a shot to get six more victories, giving them a chance to hit double digits in the win column. Their season rounds out with doubleheaders against Truman State on April 26 and Lindenwood on April 27.