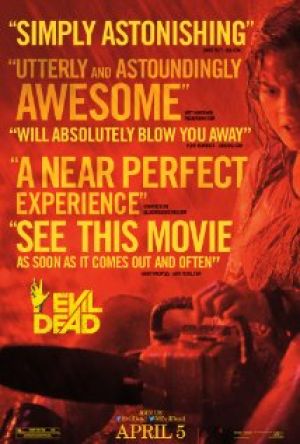 Recently I went to see the horror film “Evil Dead.”

This movie I have to say did a good job in intensifying the fear for the audience. It is everything a horror movie should be. It has some predictability, but it also has scenes that I did not see coming.

The movie follows the character of Mia, played by Jane Levy. She is at a cabin with her friends and brother where they have her take a pledge to get off drugs. While there, they discover an old cellar where they find the Book of the Dead. When Eric, played by Lou Taylor Pucci, reads a phrase from it, things get much worse because he releases an evil demon and it gets crazy from there. I do not want to say anymore, because it will give away  the movie.

One thing that struck me was the cinematography. This was evident in different scenes throughout the movie. In one scene, it was pitch black and as the possessed character was coming forward, the light would focus on one spot of the face. This was great, because it gave me that creepy feeling and made me feel like I was there. Another scene I enjoyed was an overhead view of the tree line near the beginning of the movie which started upside down. This scene gave me a feeling of hovering and it was somewhat distorting to me, because I felt like I was actually upside down for those shots.

The actors played their parts well to make the situation believable, which gave a sense of the seriousness to the movie. The great thing about the actors was they were not known actors. This is what made it enjoyable to me because I felt their fear. Having too many known actors can make the movie lack substance.

Along with the actors, the music for the movie had my adrenaline going. It wasn’t fear though, it was simply my enjoyment of horror movie music, which in my opinion can make our break the movie.

The sound effects were amazing. I liked how at certain moments the movie had an air siren that would sound off and instantly I knew that this scene was about to get crazy.

I won’t say too much about the different ways the director, Fede Alvarez, portrayed the death scenes in this movie, but they were amazing because he went to the extreme and did not have cheesy gore scenes.

“Evil Dead” is a movie that made me remember why horror movies are one of my favorite genres. The one recommendation I have is to not bring anyone under the age of 18. It also is not for someone who does not like horror movies.

Fans of the old “Evil Dead” movies will enjoy this movie as much as I did, but don’t just take my word for it.