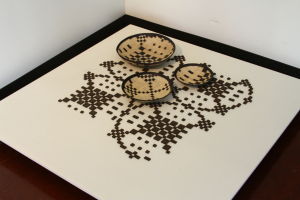 Those who are able to spend the time taking photographs, researching what’s already been done and then spending weeks with several processes may have more patience than most. Kris Roberts is one of these people.

Roberts has always enjoyed finding out where objects came from and why they were created. Although Roberts has an emphasis in art history, he also enjoys creating artwork.

“I found that I really enjoyed the more academic side of art and the learning along with making,” said Roberts, a senior fine arts major.

Roberts is fascinated by all sorts of history, in addition to art history, he even considered architecture as a career briefly.

Like most senior artists, Roberts would like to take a short break after his show to see what his options are and to reflect on his work thus far. He has applied for several graduate programs.

Art history, ceramics and a brief interest in architecture aren’t all that Roberts is interested in, however.

“I also really enjoy photography and I think that sort of feeds into the theme of history, because photography’s a way to preserve things that probably won’t happen again,” said Roberts. “That was one of the original uses of photography, to preserve and sort of distribute that knowledge.”

For the spring semester of 2012 Roberts spent most of his time in the studio while studying abroad in Belgium. During his time at Provinciable Hogeschool Limburg, he varied from his usual pottery pieces to develop more abstract works. It was here that he developed one of his favorite pieces entitled “Overshot 1.”

“Sometimes with pottery, it’s hard to be original because so many people have made a cup,” said Roberts. “So I wanted to do something a little different that I didn’t think anyone had done before.”

“Trace” will be exhibited until April 5. The gallery talk took place today Thursday, April 4 at noon. Robert’s gallery talk will be held 6 to 7:30 p.m. April 5.

Another current exhibit includes “Journeys Begun,” which will also be on display through April 5. Johnson’s exhibit is one of reflection and process. The Gallery Talk was held at noon, April 1, with a gallery reception the same day from 5:30 to 7 p.m. Johnson’s exhibit is displayed at the Neese Gray Theatre – Gallery, which is open 8 a.m. to 5 p.m. Monday through Friday.