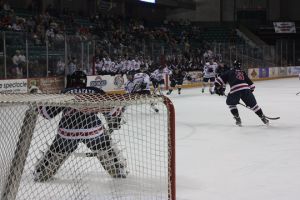 If Saturday’s game between the Topeka RoadRunners and Texas Tornado was about effort, Topeka wouldn’t have been disappointed.

Hockey, however, is about more than just effort, as Texas took advantage of two opportunities, defeating Topeka 2-1 in game one of the NAHL South Division semifinals.

“I thought our guys played our game plan to a T,” said Langer. “We only gave up 15 shots and they weren’t all grade A chances.

“[But] our second-chance opportunities, we have to jump on them. We certainly created some chances, but Leisner’s a very good goalie and we’ve got to get to the second rebound.”

Less than a minute later, at 18:40, forward Tyler Andrew deflected a shot from defenseman Kevin Patterson past goaltender Hunter Leisner to tie the game at one.

In the third period, forward CJ Reuschlein scored a 5:39 to give Texas back the lead. A late rally by Topeka gave them a multitude of chances, but they couldn’t cash in.

The series, which is best of five games, will continue at 6:05 p.m. Sunday at Landon Arena.

“We just have to capitalize,” said Langer. “We know what we’re capable of. Obviously you want to win the first one at home in this kind of series, but we have to make sure we come out and get that one (Sunday).”