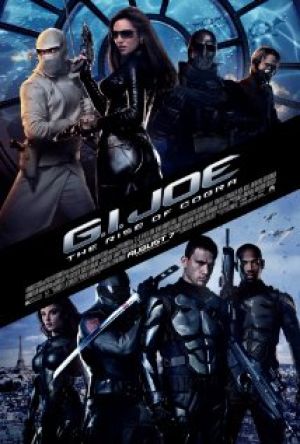 That signature battle cry was a familiar one at my house, as my brother and I spent literally thousands of hours absorbed in G.I. JOE. Reading the comics, watching the cartoon, and playing with the action figures. So when Stephen Summers announced the movie a few years back I was giddy with anticipation… and worry.

Lets face it: childhood nostalgia is powerful mojo. Screw it up and you’re in big trouble. “G.I. JOE: The Rise Of Cobra” was… well, big dumb fun. I sat through it with a goofy grin plastered on my face as it unspooled, very reminded of the weekday cartoon. But it wasn’t a good movie. (Just like the cartoon wasn’t good, and you’re hearing that from a guy who owns all of it on DVD, but it was fun).

And I couldn’t be happier.

While the new film trades in the goofy camp that made the first film what it was for a more realistic take, it works so much better. This isn’t high art or anything, we’re not going to be discussing Retaliation come Oscar time, but it was a good action flick. And it stuck much closer to the spirit of G.I. JOE. If Rise Of Cobra reminded me of the cartoon, Retaliation very much reminds me of the hours my brother and I spent playing with the toys and action figures. We frequently went off the reservation, not rehashing cartoon or comic plots, but inventing our own outlandish story arcs that would inevitably feature a new Cobra super-weapon in their bid for world domination. And then we’d throw the Joes in the deep end and hope they could swim.

And that’s what director Jon M. Chu has done here. Chu, known for “Step Up 2” and 3 has been a fan since his childhood, and not only treats the source material with respect, but directs the action scenes like a choreographed dance. Nowhere is it more evident than the mountain top cliff scene featuring Snake Eyes (martial arts expert Ray Park—who will be in Kansas City at PLANET COMICON this weekend) and Jinx VS a pack of Ninjas. (I think the proper terminology is a clan, but pack works for me). It’s jaw droping-ly beautiful.

On a side note, Paramount delayed the release of this film over nine months to accommodate a 3D conversion (you know, so they can squeeze a few more bucks out of everyone who sees it that way). I went to the standard 2D presentation, and with the exception of the mountain cliff scenes, can’t imagine the 3D up conversion really did all that much for it.

My advice, save a few bucks and go 2D.

The film gives a brief overview of the events of the first film, then leaves those waters behind. The Joes are sent on a mission to retrieve nuclear devices from a war torn country, then betrayed by the commander in chief (a dual role played by Jonathan Pryce) who is actually Cobra henchman Zartan in disguise.

While most of the outfit is wiped out and killed and then blamed for going rogue, a few Joes survive the massacre and vow to get to the bottom of things.

Leading the survivors is Roadblock, very well portrayed by Dwayne “The Rock” Johnson. For a wrestler, he’s becoming a competent action hero. Fans will enjoy seeing Lady Jay and Flint (although the former is used as so much eye candy, and the later has no personality or story arc) but it’s when the team turns to original General Joe Colton (Bruce Willis) that things start to look up for them.

So many little things work in this film, but most of all I’m pleased that the vehicles look like the ones I used to play with, the action scenes are well done, Cobra Commander looks like Cobra Commander, and the Joes feel so much more like MY Joes, Real American Heroes.