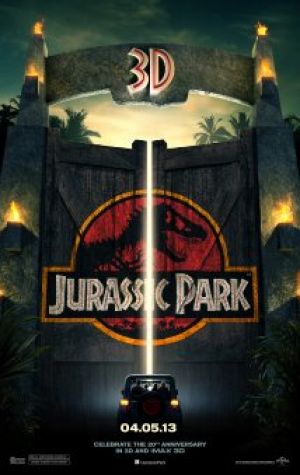 Steven Spielberg had a huge 1993, between the awesome spectacle and box office bonanza that was “Jurassic Park,” and the destined for Oscar gold, emotionally powerful “Schindler’s List.” One of these films would make a great candidate for 3D conversion, and one has Nazis.

It was no surprise that “Jurassic Park” was given the go ahead. Spielberg himself has admitted that he really has no desire to see any of his “classic” directed films get the treatment (so no rolling boulder from Raiders in 3D) but that he did feel “Jurassic Park” was the one exception. And while I breathe a sigh of relief since I do NOT want to see “Jaws,”  “Close Encounters” or the “Indiana Jones” movies get 3D paint jobs, I was very curious about Jurassic Park, as I agree with Spielberg’s sentiment that this is definitely one film that felt right for it.

3D still holds an interesting stigma for me. Part of me knows that it’s a gimmick. A very lucrative (from the studio standpoint) gimmick, but still a gimmick none-the-less, on par with a flea circus. It’s poke you in the eye fun, but not cinema. Now I like to be poked in the eye every now and then, so I do partake, but I also usually try to reserve these forays into films that really warrant it. “Avatar” and “The Hobbit,” having been shot in 3D were fantastic. “Star Wars: Episode I: The Phantom Menace” was a disappointment, as the slapping on of 3D effects seemed very haphazard. (And REALLY? I mean, 3D was practically INVENTED for Star Wars. These are movies that absolutely should be phenomenal in the format. C’mon guys, get it right!) Yes, I went and saw “Titanic” up-converted, which was done very well, “Clash Of The Titans” was NOT.

So “Jurassic Park” held both fascination and worry for me.

I am pleased to say that it holds up very well not only as a 3D convert, but also as a 20-year old movie.

The story, based on Michael Crichton’s best selling novel, deals with an amusement park with genetically engineered dinosaurs getting loose and wreaking havoc on a remote island. The film stars Sam Neil, Jeff Goldblum and Laura Dern as an intrepid group of scientists who arrive to put a stamp of approval on the park, and instead fight to survive its deadly wonders.

The 3D conversion was done with care. I was amazed the opening pieces of the film look as good as they do, individual trees pop and stand out against the background and the whole film has a definite feel of depth to it, not so much poke you in the eye, but real immersion. I admit to losing that sensation later in the film, which could have been a result of getting lazy with all those complicated special FX, or just that I got wrapped up in the story all over again and forgot to be looking for things that popped.

It was amazing to see the film on the big screen again (yes, I’m old enough to remember seeing it in theaters upon first release) and a lot of fun to watch the audience react to laughs and surprises we knew were coming. We all laughed at the “if the Pirates of the Caribbean breaks down, the pirates don’t eat the tourists” joke, and all jumped at the velociraptors in the kitchen. Those moments are all here, all preserved.

Unless of course, you’re one of those unfortunates that has never seen Jurassic Park, in which case… what are you waiting for?