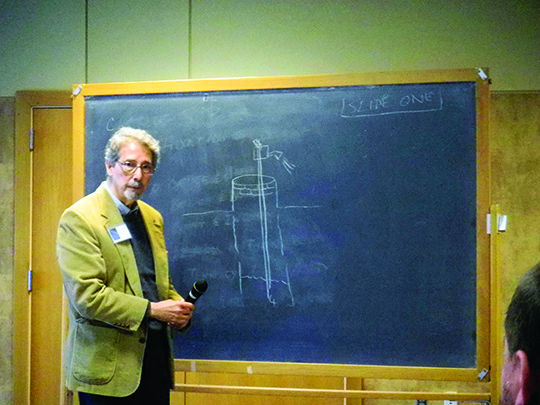 Rachel Cross, Anna Taque, Phillip Watson and Brendan Boyle, all music students at Washburn, gave insight into the music by Steven Sondheim, in a presentation at the Mulvane Museum during Apeiron last week.

“I am looking forward to performing here,” said Boyle, a junior music major. “It is an informational performance instead of a show.”

The four Washburn students explained the methods used by Sondheim that made his music and lyrics so successful. Sondheim wrote musicals and the songs to West Side Story. He won one Academy Award, eight Tony awards and a Lawrence Olivier Award.  His musical “A Little Night Music” (Eine Kleine Nacht Musik, a serenade composed by Mozart in 1787) was performed at Washburn University on March 11 by the Washburn Opera Studio.

“We got to research Sondheim,” said Rachel Cross, a junior music major. “We just performed the opera in March, and it is fun to sing the story.”

The story is about several characters whose lives are connected by marriage and passed relationships, and complicated by love and desire. At Apeiron the students sang several songs including “See” and “Soon.” These two songs showed the relationships of the two couples, Carl Malcolm (Boyd) and his wife Charlotte (Cross) as well as Fredrick Egerman (Watson) and his wife Anne (Taque). They sang these two songs as separate duets, plus one quartette at the end with all four artists together.

“The finale brings all four characters together with one common theme: what they are doing for the weekend,” said Boyle.

Sondheim’s work presented a challenge to the performers.

“The music is difficult enough that you have to get through it with opera technique,” said Boyle. “To do Sondheim, you need the rhythm, lyrics and the words, and Sondheim is not easy.”