The Washburn Review • May 28, 2013 • https://washburnreview.org/11444/arts-entertainment/soundgarden-rocks-out-at-midland-theatre/

Soundgarden rocks out at Midland Theatre 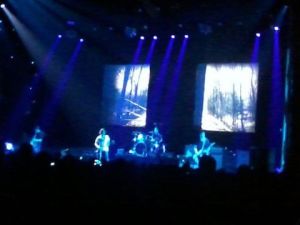 For the first time in 16 years, Soundgarden brought down the house at the Midland Theatre last Wednesday night in the Power and Light District in downtown Kansas City.

Their performance was filled with spectacular lightshows, together with slideshows that complimented every song they played. Soundgarden played a wide variety of songs ranging from their first 1987 EP, “Screaming Life,” to their 2012 release, “King Animal.”

They opened up their set with “Searching with My Eyes Closed.” After performing “Kickstand,” lead vocalist Chris Cornell said to the crowd, “It’s been 16 years since we performed this song live. It sounds just as good 16 years later.”

Cornell invited the audience to sing along during “Blow Up the Outside World.”

Soundgarden is currently on their second leg of their tour, ending in Mexico City on May 31. Last time they performed in Kansas City was in 1997, before Soundgarden disbanded. They then reunited in 2010.

“I never thought I’d get to see them live,” said Ryan Hodges, a local fan and recent Washburn graduate. “As much as I love Pearl Jam, Matt Cameron belongs in Soundgarden.”

Cornell invited the audience to stand, and then dedicated “Superunknown” to them, in which the crowd cheered and sang along with him.

Their finale was “Rusty Cage,” from their 1991 release Badmotorfinger.

It was great that Soundgarden played not only their more familiar songs such as “Spoonman” and “Fell on Black Days,” but also familiarized the audience with their new material, such as “Been Away Too Long” and “Taree.”

Soundgarden had a remarkable show, and it was very well worth the trip.