The Washburn Review • May 1, 2013 • https://washburnreview.org/11429/features/movie-lacks-smart-science-fiction-feel-tells-not-shows/ 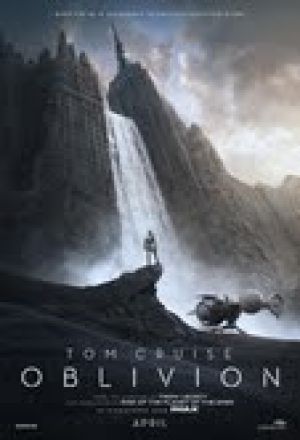 What to make of “Oblivion,” the new cinematic event from Joseph Kosinski, the director of “TRON: Legacy” and the producers of “Rise Of The Planet Of The Apes,” starring Tom Cruise? Well, funny enough, you get exactly what you’d expect mixing those together. A visionary-looking piece of cinema couched in a strong concept starring Tom Cruise.

Unfortunately, while the film strives for so much more, it stalls and never manages to get over the hump of how impressive its visual flair is or how smart the science fiction should be, which makes it all the more frustrating.

Cruise stars as Jack Harper, a security repairman stationed on an evacuated Earth in 2077. As we learn in the voice over, aliens attacked the moon and shattered it, causing mass earthquakes and tidal waves before they invaded.

Humanity struck back with nuclear weapons, and defeated them, but left the planet an irradiated wasteland. Now we’re bugging out, and Jack’s mission is to secure the massive operation to extract vital resources from the planet before joining the rest of the survivors on Titan. But as the movie unfolds, Jack finds himself drawn into a series of shocking revelations that connect him to Earth of the past.

I’m reminded of a saying of the late great Roger Ebert, who was firm of the belief that if you start a movie with a voice over telling us what happened off camera, you have failed as a filmmaker. Rule one is show, don’t tell. I didn’t put much stock in the theory when I first heard it, after all, Star Wars has a prologue and it’s pretty good. But, the more I started to pay attention to movies that followed this model, the more I realized he was right. All of the information at the beginning of “Oblivion” is regurgitated to us again later in the film. Had it not appeared at the beginning, the beautiful vistas of a ruined planet that Jack flies over would have been a deeper mystery and added to the atmosphere instead of so much eye candy. And why tell us at all if you’re gonna repeat the speech almost verbatim later in the movie? It’s an example of pandering, dumbing down the film so that more people can keep up with it, but instead it’s insulting to the audience and damaging to the film.

As for the shocking revelations, well, some were and some weren’t, which oddly, I blame on the production design. It’s fantastic, by the way, that super high gloss “Star Trek”/ ”Minority Report” look, and really helps sell the visual treat that this movie is, but, eagle eyed viewers will spot the problem that I did relatively quickly, and puncture a hole in the balloon that is that plot surprise.

This is unfortunate, because “Oblivion” strives so hard to be smart science fiction. I very much love smart sci-fi—which in Hollywood can be hard to come by. When I find smart sci-fi, I want to praise it highly.

“Oblivion” could have relied on gun battles and special effects to win us over, and it didn’t. It took the high road or tried to. It even echoed my favorite Cruise film, “Vanilla Sky,” but the plot just isn’t quite fleshed out enough and starts to rely on just about every science fiction trope in the book by the time it’s done.

In the end, “Oblivion” is an enjoyable film, and yes, it’s totally worth seeing. But maybe wait for the cheap theaters or even better, the DVD/Blu-ray release cut.