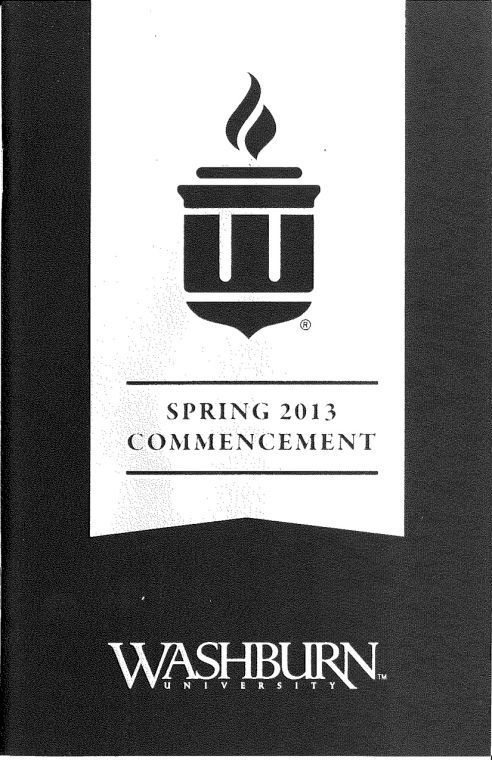 The School of Applied Studies began its ceremony at 9:30 a.m. in Lee Arena.

Fifty-three master’s degrees were awarded by the school and more than 280 associate and bachelor degrees were also awarded this morning.

Claire Crawford, graduating with a bachelor of social work, was named a 2013 Sibberson Award recipient at the SAS commencement. This award is a substantial monetary award established by the trusts of sisters Erna and Gretchen Sibberson. The purpose is to honor the highest ranking members of the senior class. The awards are made annually at each commencement.

The College of Arts and Sciences had its ceremony at 12:30 p.m. Saturday. Twelve master’s degrees were awarded by the college and more than 280 associate or bachelor degrees were awarded. During this ceremony, Stacy Rottinghaus, who received a bachelor of arts in mathematics with an emphasis in education, was named a Sibberson award winner.

Betty McEnroe Casper was also awarded an honorary doctor of public service at the CAS ceremony.

“Words cannot express my joy or appreciation,” said Casper. “Washburn – I love you.”

The alumni classes of 1953 and 1963 were honored as golden Ichabods and were presented with awards from the Washburn Alumni Association.

It was announced at the CAS ceremony that graduates represented the countries of China, Paraguay and Turkey.

At 3:30 p.m., the third commencement ceremony of the day began as School of Business and School of Nursing faculty and students filled Lee Arena. Both the business and nursing schools awarded 15 master’s degrees. The SOB awarded 82 bachelor of business administration degrees and then SON awarded 90 bachelor’s of nursing. During this ceremony, Brett Yingling, bachelor of business administration in finance, won a Sibberson award. Lauren Himpel, bachelor of science in nursing, also won a Sibberson award.

Barry Feaker was awarded an honorary doctorate of public service. Feaker thanked his family and friends for the award and encouraged graduates to consider helping those less fortunate. He made a special point to thank his mother, who was in attendance, and to wish all moms at Happy Mother’s day.

It was announced during this ceremony that graduates represented the countries of Canada, China, Germany, India, Paraguay, Saudia Arabia and Tajikistan.

During his remarks, Washburn President Jerry Farley offered his own advice to the graduates.

“First, talk, but listen,” said Farley. “You are ready to contribute and must form working partnerships.”

Farley quoted Micah 6:8b where he encouraged graduates “to act justly, and to love mercy and to walk humbly with your God.” He went on to encourage the new alumni to engage in healthy debate, be thoroughly prepared and to believe in yourself. He noted the importance of working hard, eating healthy, avoiding tobacco and being physically active.