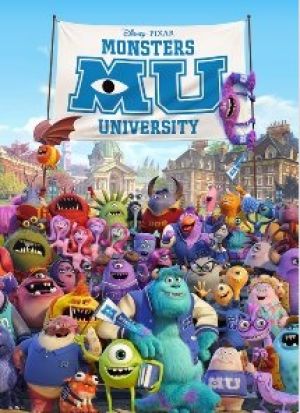 I recently had the opportunity to catch the latest film from Pixar, “Monsters University.” The film takes place in the same universe as the 2001 movie, “Monsters Inc.”, also by Pixar. Instead of following up on that film with a sequel, Pixar elected to try their hand at a prequel, a first for them.

“Monsters University” opens with Mike Wazowski, the green skinned eyeball on legs from the first film, as a child. He’s on a field trip to the scare floor of Monsters Inc., where children are scared to create scream energy. The voice for Mike as a kid is passable. Unlike most child voice actors, the kid seems to know what he’s doing and makes the character believable. After Mike sneaks onto the scare floor and into a child’s room, unbeknownst the monster doing the scaring, he becomes inspired to become a “Scarer” by attending the prestigious Monsters University.

After a brief montage of Mike growing up, we see him step off the bus and into Monsters University. He meets his roommate, Randall Boggs, the purple lizard and villain from “Monsters Inc.” who’s actually not a bad guy at first. Mike then starts his first day of scaring class, and we’re reintroduced to James P. Sullivan, or Sulley, the big fuzzy blue and pink guy from the first movie. At this time, though, Sulley is quite the slacker, riding through life on his family name, as his father was a well-known scarer.

Mike and Sulley develop a rivalry over the course of a montage; with Mike using his wits while Sulley uses his inherent scariness. I found this to feel weird, as the two were so close in “Monsters Inc.,” to have them start out as enemies was just odd. Their rivalry culminates in the two of them accidentally destroying a scream canister containing a prize-winning scream collected by the Dean of Monsters University. She promptly kicks them out of the Scare program. Not soon after, Mike makes a bet with her. If he and the less-than-stellar Oozma Sigma fraternity can win the annual Scare Games, she’ll admit them all into the scare program. If they lose, Mike will be expelled. With Mike’s team a member short, Sulley joins the team solely to get back in the program.

Over the course of the trials, Mike and Sulley warm up to each other, beat the odds and win the scare games… by cheating. In the final challenge, the scare simulator, where the monsters scare a simulated human child, Sulley turned Mike’s simulation down to easy mode, unbeknownst to the rest of the team. When Mike finds out, he goes to the human world to prove he’s scary. When Sulley finds out, he follows him. The two work together and manage to scare a group of adults, a feat unheard of in the monster world. After they return to Monster University, Sulley and Mike are inevitably expelled, entering the corporate world of Monsters Inc. at the bottom rung, mail duty, and working their way up to start the events of “Monsters Inc.”

Overall, “Monsters University” was a good, fun film. It wasn’t up to the usual Pixar standard of quality like “Toy Story,” “Monsters Inc.,” and “The Incredibles,” but it was still good. I definitely recommend seeing it. I had a few problems with its logic in some places, but it’s been one of the few movies this year that genuinely made me smile.