A little bit of Germany in Topeka 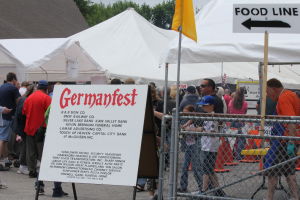 What started off as a dreary and overcast weekend ended up being a sunny, bright and perfect day for Topeka’s annual Germanfest held by Sacred Heart St. Joseph Catholic Parish.  The two day event was held in north Topeka in the church grounds and surrounding areas. It was packed both days.

“The spirit of community was in the air today and that’s why I come here every year,” said Janelle Gonzalez, a senior psychology major at Washburn.

Germanfest attracted local Topekans and people from surrounding areas such as Lawrence and Wichita to enjoy the authentic German food, music and of course beer. Food was not only the main attraction at the festival. There were also several booths filled with jewelry and crafts for sell. There will ongoing auctions as well as basket booths.

Food trucks sold authentic German sausage, homemade noodles and other German delicacies. In fact, the food was so popular that the line began in the basement of the church and wrapped all the way around to the street outside.

The grounds were also scattered with several inflatables, ice cream stands, rides and crafts for children to engage in.

Several Washburn and KU students were in attendance to enjoy the authentic German beer and beer garden.

“I really like the jewelry, but I really came here to spend time with my friends at a fun activity,” said Gonzalez.