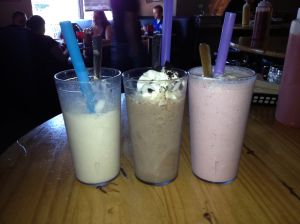 The Burger Stand, a local bar and burger joint, just off of the Washburn campus, recently added milkshakes to its already extensive menu. They added six shakes, three of which are alcoholic. I didn’t try those, however I did try the vanilla, old time strawberry and double chocolate Oreo shakes.

Honestly, there isn’t much to say about the vanilla shake. It was creamy and smooth, while still remaining sweet, though not overly so. It’s a good shake, don’t get me wrong, but there’s only so much you can do with vanilla, and, if you’ll forgive the pun, there wasn’t really anything really that shook up the recipe for this milkshake.

The old time strawberry milkshake, on the other hand, had the right balance of tangy and tart, while still maintaining the sweetness that must be present in a milkshake. It was made with real strawberries, which is both a positive and a negative, as it provided authentic strawberry flavor instead of some prepackaged flavored syrup mess. At one point, a sip I took had a fair bit of shredded strawberry leaves in it.

The double chocolate Oreo shake was very rich and chocolatey, go figure. The flavor itself was all well and good, being particularly delicious. One complaint I did have though, was that the Oreos were ground up a little too fine. They almost dissolve in your mouth, which is quite contrary to the crunchy texture they usually have. I missed having that variation of texture in my shake. When I reached the bottom of my glass, I realized the Oreo pieces that would have been big enough to add said texture had sunken to the bottom. Still, overall, the double chocolate Oreo was probably my favorite shake of the three.

All shakes were noticeably foamy. Whether that’s a pro or a con is up to the consumer, as I enjoy an occasional bit of foam. They were all served with odd neon straws, whose diameter was a little less than that of a dime. The shakes were also a little thicker than your regular glass of milk, but not up to the usual thickness you’d expect from a milkshake from someplace like Steak n’ Shake or Sonic, the exception being the double chocolate Oreo, which was almost watery, hence the previously mentioned Oreo pieces sinking to the bottom.

The atmosphere at The Burger Stand was similar to that of any other college pub. Beers signs decorate any surface they can be mounted on as the popular hits of the day, including Daft Punks’s new “Get Lucky”, blare over the loudspeakers. Service was reliable, taking between eight and ten minutes for the three shakes.

Overall, every shake was delicious in their own way, but they each cost five bucks for a portion served in a standard soda glass. I personally think that’s a little too expensive for such a small portion. That being said, if you take advantage of The Burger Stand’s Half-Price Mondays for students, I can totally recommend picking one of them up for only $2.50.

I’m only 20 years old, and cannot review the alcoholic milkshakes. The Burger Stand’s selection of alcoholic milkshakes include the Almond Joy, the Mudslide and the Birthday Cake. If you’ve tried them, feel free to leave a comment to share your experience with your fellow Ichabods!