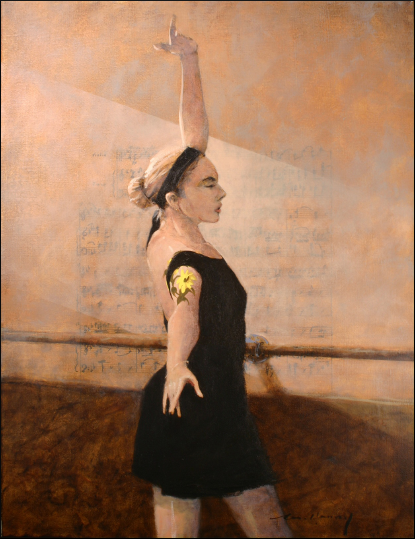 A painting by Mike Henry for the Sunflower Music Festival. The winner of the silent auction for this artwork will be announced during the final concert on June 15.

The Sunflower Music Festival will be celebrating its 27th year June 7-15 at White Concert Hall. The festival began in June 1987. The festival is sponsored by leading area businesses, generous private donors and philanthropic foundations. Concerts are free and open to the public.

Participating musicians come from both national and international symphonies and musical institutions. The Blanche Bryden Institute was developed by the Festival musicians for the advanced study of chamber music. Both high school and college musicians come together for a week of learning during the week of the festival, and their performances are coached by Sunflower Orchestra musicians.

The Sunflower Music Festival is hosted by Washburn University, and is being held at White Concert Hall on 17th and Jewell. All concerts start at 7:30 p.m.. Saturday, June 15, there will be two performances, the first at 3:30 p.m., and the final performance of the festival at 7:30 p.m.

On display at the White Concert Hall, is a painting by local artist Mike Henry that will be up for bid at a silent auction, that was created especially for the Sunflower Music Festival. The winner of the silent auction will be announced at the end of intermission of the final concert on Saturday, June 15.

According to the festival’s website, Mike Henry described the meaning behind his painting:

“The picture I made for the Sunflower Music Festival has done a couple things for me personally. First it allows me to support the arts, something I always lobby for and I thought I had a neat idea. This model is a past student of mine, and someone many of you might have seen dance. It is Becky Iliff. The music in the background was inspired by Becky Green, the lower school music teacher at Cair-Paravel. I knew Becky would expect the music to be authentic. Wow! My wife’s name is Becky. That’s a lot of Beckys. The tattoo, well, I was just looking for something different.”

Henry’s painting will be the fifth piece of artwork an artist has donated to the festival for silent auction.

“We’re very blessed that he was able to do this for us,” said Carole Hawkins, Festival Coordinator.

For more information about concert schedules or any of the featured guests or artist Mike Henry, visit the festival’s website.