Happy trails to a lifetime Ichabod 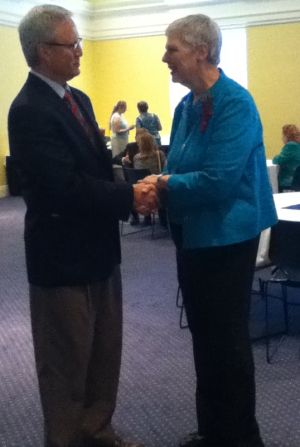 Vogel was also a faculty member in Washburn’s Modern Language Department and taught German from 1969-2010.

“Really she is more than just a Washburn employee, she is an alumnist. She’s a graduate of Washburn. That makes it more special,” said Susie Hoffman, Washburn alumni director.

Vogel also grew up right across the street from campus. Her family tree includes parents, siblings and cousins who all attended Washburn before her.

With family ties, proximity and affordability, Washburn seemed the likely place for Vogel’s college career; but the choice was not immediate. The adventure of attending a college miles from home was definitely appealing, but Vogel finally decided that Washburn could offer the same opportunities, if not more.

“It came down to academic grounds,” Vogel said, “And, even though I lived at home, I could be involved in a lot of things on campus.”

And involved she was. In fact she became so involved that she never really left.

Vogel graduated from Washburn in 1967 with a B.A. in German. After earning her Masters from the University of Kansas, she returned to Washburn in 1969 to teach German. In 1974, Washburn President at the time, John Henderson, asked her to be the EEO director of Washburn.

While a student she was involved in many activities and continued her involvement through the years.

Some of her service interests and activities include: Board Member for the Brown Foundation for Educational Equity, Education and Research, AFS Intercultural programs, Ictus Campus Ministry, Kappa Alpha Theta, Nonoso Honorary Society and numerous other board and community committees.

When asked what she will miss most about Washburn, Vogel showed no hesitation.

“All the people,” Vogel said. “Because of the people this has been a good place to work. And I’m proud that Washburn has stayed true to its roots. “

Washburn opened its doors in 1865 with the principle of accessible education for all, regardless of race, gender, ethnicity, or income. Vogel proudly explains how the first class of Washburn included women and people of color, which was remarkable for the era. Washburn has also worked over the years to ensure its buildings can accommodate students with disabilities.

Within her life span, Vogel said she has seen Washburn transform from a traditional, small campus to what it is today. As a student, she witnessed the aftermath of the tornado that damaged her home and campus in the summer of 1966.

Vogel was among the students who took classes in the portable trailers while the campus was being rebuilt and has since witnessed the development of residence halls, Henderson Learning Resource Center, Stauffer Commons, the Art Building, Student Recreation Center and other buildings and policies that have enhanced the lives of both students and faculty at Washburn.

As EEO director, Vogel has been instrumental in helping with many policies and procedures that have helped students continue to experience Washburn’s principle of equality education for ‘every’ student. Looking at the position policy, which Vogel helped create, it is easy to see the remarkable work that her position entails.

“Typically you can always replace somebody, but really for her, she’s irreplaceable. There’s nobody like her,” Hoffman said.

Des Moines, Iowa will be Vogel’s new home. Her house is up for sale and everything packed and moved. For now, Vogel and her husband, previously retired, are living in their camper trailer until her last day as a Washburn employee.

After 68 years of living in the same town and a lifetime connected to Washburn, many who know Vogel will miss her, but understand one of the reasons she is so anxious to finally move miles away. Well…make that two.

Two-year old twin grandchildren. Vogel is excited about living close to her son and daughter-in-law to help care for the little boy and girl who call her ‘nana.’

As a breast cancer survivor for six years and having survived the death of a son, Vogel understands how life events can put everything into perspective and help one reconsider priorities.

In addition to grandchildren, Vogel plans on traveling across the United States with her husband and staying active within her new community. She would love to become a ‘cuddler’ for premature babies in NICU.

“She has all sorts of ties to faculty, staff, alumni and students,” Hoffman said.

With all these ties to Topeka and Washburn, Vogel’s traveling includes a trail back ‘home’ to visit.

The advice Vogel gives for the next EEO director is simple yet positive.

“Be fair, reasonable and objective. Have a good attitude and be a good listener,” Vogel said. “Use the resources here to do your job. And, of course, I’m always a phone call away”

An interim will work until the position is filled. Vogel is not worried about the transition because she is confident in the people and process of Washburn.

And of course Washburn is equally proud of Vogel. After all, she is family.