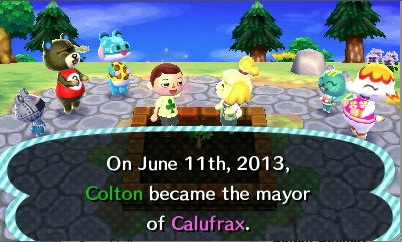 Animal Crossing: New Leaf came out for the Nintendo 3DS June 9. In this version there are many updates and you are the mayor of your city.

When I sat down to pen this review of Animal Crossing: New Leaf, the latest Animal Crossing game on the Nintendo 3DS, I found it wasn’t as easy as I thought it would be. Animal Crossing is less of a game and more of an experience. Unlike most games, Animal Crossing has no set goal. There isn’t a princess to rescue, or a planet to save. It’s just you and the villagers in your town sharing a life that happens in real time.

The game starts with your character riding a train to make a new start in a new town. After a while, a cat named Rover comes over and asks you your name, what town you’re going to and what it looks like. Your responses become your character’s name, your town name, and the layout of your town. I like the way Nintendo set this up. Instead of just choosing stuff from a menu, you’re interacting with a character from the start. After a few more questions that determine what your character looks like and what gender they are, you step off the train into your town.

I say “your town” because as you step off the train the animal villagers welcome their new mayor, you! The secretary to the mayor, Isabelle, the adorable yellow Shih Tzu, explains that the new mayor sent her a letter saying that he/she would be stepping of the train you were on, since you were the only person to step off, that makes you the new mayor. This mayoral business is actually new to the Animal Crossing series and implements a few interesting features, which really add to the feeling of being in charge of the town. As mayor, gamers can enact policies can affect things such as how quickly plants grow and how late shops are open. Mayors can also create public projects like bridges, signposts and even new shops. The projects require funds, which will be partially donated by the townsfolk over time, but if you want the project completed sooner, you’ll have to fund the project yourself.

Don’t spend all your money on projects, though, as you’ll also need it to buy a house, furniture, clothes, hats, and more. The best way to make money in the world of Animal Crossing is to catch and sell bugs and fish. In addition to the usual tools, axes, shovels, slingshots, watering cans, nets and fishing poles, there’s also a few new items. There’s the diving suit, which lets player dive for rare sea life and the megaphone, which uses the 3DS microphone to find villagers by saying their name. I think these new features are really fun and add new depth to the game.

A couple of the new things that were added in New Leaf included two new animal villager species, hamster and deer, new villager personality types, the ability to scan QR Codes to make outfits and patterns, and a tropical island with rare bugs and items ran by the retired mayor, Tortimer.

Overall, Animal Crossing: New Leaf is a great installment in the series. It adds new features without sacrificing the charm and personality that made previous entries great. The writing, in particular, is brilliant, having a charming quirkiness to it. I’m hesitant to reveal all the new things added to the game, as though slowly unlock over time. I thoroughly recommend picking up this game as soon as possible.