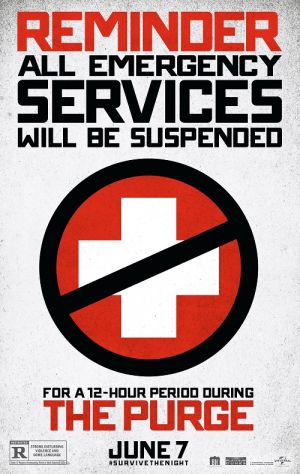 Recently I went to see “The Purge.” I was interested in seeing this movie because it was intriguing to me. I thought the storyline was going to be real good from what I saw in the previews.  After seeing this movie, I was disappointed because the plot was too simple and the whole movie had a lot of dry spots. The only action was near the end. The plot for this movie was that in this new world crime is only legal one day a year for 12 hours in which no emergency vehicles answer any calls. Everyone is free game except for high ranking officials. The family that was shown in the movie had a boy who lets someone in their house and then the family is a target. I don’t want to say anymore because it will give the rest of the movie away.

The one thing the movie did well on was the cinematography. There was a lot of contrasting light when the power goes out and you can believe the emotions of the actors. The acting was not really there, because there were just a couple of lines and then silence for a bit. This movie just made me wish i would have seen a different movie.

The deaths scenes in the movies were basic. It did not take that long for the fight scene to end and it left me wanting more out of this movie.  I would have to give this movie 1 out of 10 stars because there was no real plot to this movie. Don’t take my word for it and check it out.