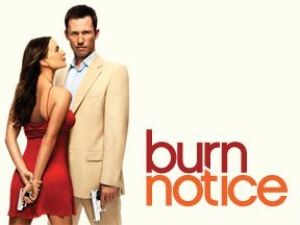 Recently on Netflix I watched the TV show “Burn Notice” because I wanted to watch older episodes of the show. The story is about a character named Michael Westen who is played by “Jeffrey Donovan” in which he is a spy. He starts out on one of his spy missions and during the mission he is calling in to headquarters and they tell him he is blacklisted because they have a burn notice on him.  Michael is on a search to find out who burned him and why. While this is going on he is helping people with big problems of their own.

This show is fun to watch because they always keep me on the edge of my seat. I never know the plot twist that will happen in the show. I also like seeing the different types of explosions that they have and they explain how to keep calm in a tough situation. I really like the lighting in some of the scenes because whatever feeling I am suppose to be feeling in that scene is intensified. The actors play their parts well and make you feel like you’re actually there.

Burn Notice has five seasons on Netflix right now. Season six is on DVD. The show airs on USA Network and they are in the seventh and final season. I would have to rate this series a 10 out of 10. Don’t take my word for it and check it out.