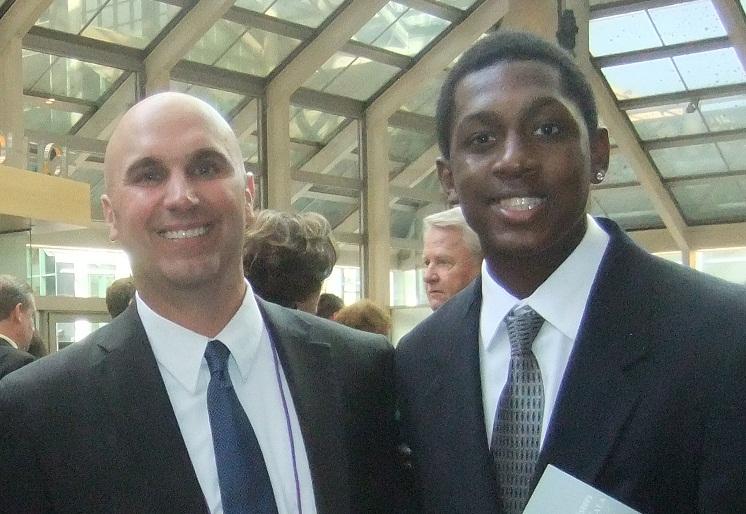 Pat Ferrell smiles after winning the national big brother of the year award. Pat, matched through Heart of Illinois Big Brothers Big Sisters, has been Big Brother to 16-year-old Jamir since 2009.

Topeka Native, Pat Ferrell, son of Dean and Pam Ferrell, is this year’s national Big Brother of the Year. Big Brothers Big Sisters of America selects the winner from hundreds of submissions from the mentoring network’s 340 local agencies across the country. Comcast and NBCUniversal, as part of its sponsorship of the 2013 Big Brothers Big Sisters of America National Conference, presented the awards at a recent gala in Denver.

Pat, matched through Heart of Illinois Big Brothers Big Sisters, has been Big Brother to 16-year-old Jamir since 2009. Pat expected his Big Brother commitment to last at most a year and be limited to visits to his Little Brother’s school. That was the agreement he made when his employer, RLI, launched a corporate partnership with Heart of Illinois Big Brothers Big Sisters’ Peoria office. With a six-year-old son at home and a busy career, he could not imagine that he would have more time to spend as a volunteer mentor. Then he met Jamir, his eleven-year-old Little Brother.

“We initially connected on one level – our love for sports,” Ferrell said. “Jamir was pretty reserved and struggling academically. But as fast as our friendship blossomed, his grades improved.”

The noticeable progress was enough to encourage Ferrell to do more. He made a deal with his Little Brother, promising that if he turned in all of his homework and had no unexcused absences for three straight weeks, he would take him to his favorite restaurant.

Jamir held his Big Brother to the bargain, letting him know the day and time he could meet him at Jimmy John’s for subs. Before Ferrell knew it, he was applying to be Jamir’s Big Brother outside of school in the agency’s community-based mentoring program. Jimmy John’s became a frequent meet-up spot.

“Pat has helped me really focus on my school work by giving me incentives or goals to meet. As I started reaching those goals, I noticed that everything he was preaching started to make sense and it was all setting in,” Jamir said.

“The national Bigs of the Year should be more than great mentors; they should bring new meaning to the concept going above and beyond. Pat Ferrell is that Big,” Match Specialist Jami Truelove said.

Last summer, Ferrell helped Jamir get a scholarship to attend a premier basketball camp at Kansas University. Jamir had an amazing time and was able to improve his basketball skills. Ferrell is driven to help his Little Brother maintain a clear perspective of important aspects of life off the court as well.

“If you asked Jamir to name his favorite activity we do together, it has nothing to do with basketball or going to movies, or bowling, or anything like that,” Ferrell said. “It’s just coming over to our house and hanging out. I would do anything for Jamir. He’s smart, funny, polite and genuinely cares about people. He has become a part of our family.”

Pat graduated from Topeka High School in 1988 and Bethany College in Lindsborg, KS with a degree in political science in 1993. Topeka residents and proud parents, Pam and Dean Ferrell attended the event. Pam commented on the Big Brothers Big Sisters program by stating, “We are so very impressed with the caliber of the program and truly how very many lives have been touched through the years.” She recalled a quote that hung on refrigerator when Pat was growing up that said, “Sometimes we try so hard to give our children what we never had, that we fail to give them what we did have!” She said both her and Dean have watched Pat share with Jamir the things ‘he did have while growing up’ – who could ask for more.”