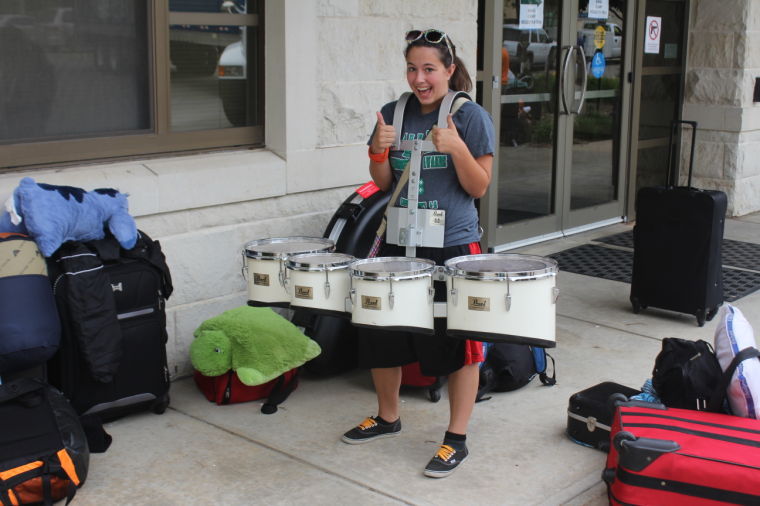 High-school students from all across Kansas began pouring into the Living Learning Center in droves to participate in a band camp preparing them for the upcoming Shrine Bowl. The 30th annual Shrine Bowl will be held at Yager Stadium on July 27. Students who are attending the camp are nominated by their high school music teachers, while their trip is funded by a Masonic Lodge in their town. The time they spend at this camp will not only train these students to play the music for the bowl’s half-time show, it will encourage them to develop teamwork, and determination.

Gary Van Cleave, director of the Shrine Bowl Band Camp said “Working together as a team is probably the biggest thing these kids will learn.” Van Cleave went on to explain, saying “We have a lot of kids coming here from small towns, where they don’t have a marching band, and instead they’re confined to a pep band, or a concert band, or a jazz band, and so we hope they will take what they learn here home to their friends and pass it on to others in their community, leading to a domino effect where more and more kids want to attend the camp next year, because their friend learned so much and had so much fun.”

One of those kids is Emily Sarber of Kiowa County High School, who will be a drummer during the bowl, and is attending the camp for the first time. Sarber said “I think the thing I’m most looking forward to over the week will be the chance to make new friends.”

It’s not all fun and games though, as according to Cleave students attending the camp “work their butts off from 8:00 AM to 10:30 PM, everyday for five days.”

“As for the schedule, they get an hour off for breakfast, lunch and supper, other than that, they’re either on the practice field, or they are inside working on their music. They have very little free time, but they are dedicated to doing this and they’re dedicated to their music.” Cleave said.

As a final comment, Van Cleave said “I have had so much joy doing this for 19 years. When I first started, I was surprised how young people from the four corners of Kansas, and all points in between, could join together and play as one.”

The students attending the Shrine Bowl Band Camp will be playing half-time show at the Shrine Bowl game on July 27, which starts at 6:30 PM. Admission to the game for adults will cost $11.50, while a student ticket (grades K-12) will cost $7.30. All benefits from the event will go to the Shriners Hospitals for Children.