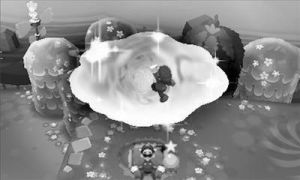 Mario & Luigi: Dream Team on the Nintendo 3DS is the latest entry in the handheld Mario and Luigi RPG series from Nintendo and AlphaDream. In these games both Mario brothers are controlled by the player at the same time in a top-down perspective, with Mario and Luigi’s actions being assigned to the A and B buttons respectively, allowing for unique and interesting puzzles.

Dream Team is the fourth installment of this series and is the first to feature Bowser, the brothers’ dragon-turtle foe, as the primary antagonist. While this is a nice return to the Mario Bros. roots, most of the previous games have poked fun at Bowser’s princess snatching ways and relegated him to more of a comedic side-villain role, making this feel like a step backwards from a story perspective. Instead, Bowser shares the villain role with new character Antasma, king of the bats, a very competent villain with a very cool design. Antasma also speaks with the typical vampire lisp, which is just a neat little detail that I’m glad the script writers included.

Another new addition from Dream Team is the Pi’illo Kingdom and its residents, the Pi’illos themselves, a race of pillow people that were petrified in stone for centuries after a great calamity. The Pi’illos add a new mechanic to the game in the form of a side-scrolling dream world. This realm is accessed by having Luigi sleep on a Pi’illo which opens up a dream world portal that Mario must enter, allowing them to revive the Pi’illo.  In the dream, Luigi can possess certain objects which will alter the world based on how the player interacts with the sleeping Luigi on the touch screen.

Combat in both the dream world and the real word is pretty much the same, though that’s not to say it’s not fun. Unlike most other turn-based RPG’s, the Mario & Luigi series has always had counter, dodge, and timed hit systems, which Dream Team continues. These systems keep the player engaged, whether it’s their turn or the enemy’s, by allowing them to dodge counter, or deal extra damage with a well-timed press of the correct button. This is a very fun, yet very challenging concept, which I’m glad was retained. Another challenging part of the game are the appropriately named Expert Challenges, which test the player’s skill in these systems, adding challenge for those who want it and rewarding them with rare items.

If I had one complaint with Dream Team, it would be what happens when you die in combat. Nothing. There’s no punishment or consequence, you’re just brought to a game over screen and a menu to restart the fight, restart the fight in easy mode, or give up.  There’s no reason to use any of the game’s many revival items, as there’s no consequence for dying. Maybe it’s the hardcore gamer in me, not being sent back to my most recent save after dying just bugs me. It cheapens the experience. Though despite that, I do still enjoy Dream Team.

As of writing, I’m approximately 20 hours into the game, the writing is superb, the art style is beautiful and the music is catchy and memorable.  Mario & Luigi: Dream Team is well worth the $40 price, and should be a part of any 3DS owner’s collection.