Topeka Metro makes effort to ‘get the Bods on the bus’ 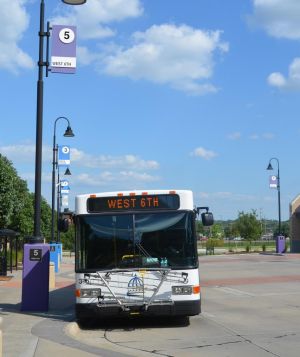 The Topeka Metro station is now offering free passes to all Washburn University students. This decision was motivated by students’ lack of awareness of the metro station and a desire to strengthen the relationship between Washburn and Topeka Metro.

Susan Duffy, general manager of Topeka Metro, said that research performed by a previous Washburn class found that approximately 70 percent of students were unaware that the metro station exists. Of those that did know, many had unfavorable impressions.

“We learned that we really need to get in touch and be a part of the campus,” said Duffy.

A “How to Ride” session was recently held for the international students to assist them in becoming acquainted with using a metro system. They will be picking a couple of dates to bring a bus on campus and provide a similar service for other students in the near future. Students will be able to go on board, get a feel for the busses and become educated on how it works.

“I definitely do think it will save gas and it would be nice to see the town,” said Contessa Caraballo, a junior transfer student from Garden City Community College.

Students must show their Student ID card to the bus driver in order to ride free. With part of 17th Street closed due to construction, a detour is currently being run through campus down Durow Street to 19th Street. Once the construction has ended they will be moving back to designated stops along 17th. However, Duffy said they still consider themselves to be a “flag down” system. If the bus drivers see someone waving their hand on a corner they will stop to pick them up if possible.

A pass for a single ride normally costs $2 and a monthly pass costs $50. Duffy hopes that offering free passes this year will allow students to become comfortable with the metro system cause and a desire to continue using it in the future.

“We’re hoping that the Washburn students will embrace us and see us as a transportation alternative,” said Duffy.

Topeka Metro’s hours of operation are 6 a.m. to 6 p.m. Monday through Friday and 8 a.m. to 6 p.m. on Saturdays. The busses run every half an hour and cover 12 different routes across the city. Each bus holds up to 55 people and all are fully air conditioned. The main station, Quincy Street Station, is located at 820 SE Quincy St.

Details on busses and routes along with other helpful information can be found on their website, www.topekametro.org.

Duffy wants to challenge students to try the metro and see if it will work for them.

“Washburn is such a wonderful asset to the city,” said Duffy. “It is a jewel. Whatever we can do to support Washburn, we are supporting the city. We feel very strongly about that. I encourage folks to get the Bods on the bus.”