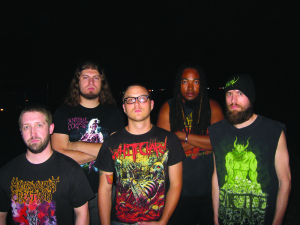 Watch out Topeka metal fans there is a new metal band in town. They are called Breathing Death, and is made up of Heath Warders (bass), Daniel Ornelas (lead Guitarist), Aaron Dehner (lead Vocalist), Spencer Taylor (Guitarist) and Justin Harries (Drummer).

“We have been together for a year and a half since March of 2012 and it all started with Justin meting Spencer and asking me to do vocals, then Heath joined,” said Ornelas.

This is what made the original four members line up.  Just a few weeks ago they added a new lead vocalist to the band. Previously, Dan sang the vocals for the band, but now Aaron Dehner is the lead vocalist. Dehner is also in another band, called, On the Shoulders of Giants. With Aaron Breathing Death can progress even further than where they are now to more of a brutal death metal band. The other members express that they really like having Aaron in the band because of how dedicated he is to music.

“We were more of a progressive death metal/ death core, but on our new album we are shooting for more of a technical brutal death metal sound,” said Harries.

With their new vocalist they will be able to do this with his brutal lower vocals. They have a sound that is all there own and sure they get their own influences from bands each of them grew up on, but all of them have there own style and they blend them together, making noise in the metal community to make up Breathing Death.

When talking about touring they would like to see themselves in the next couple of years playing more shows in the surrounding areas like Lawrence and Kansas City.  They have played shows in Topeka, Manhattan, and Des Moines, Iowa.  They are not worried too much about touring at the moment, because they are all about having fun and as far as touring goes they will deal with that when it comes.

Fans of Breathing Death can buy four of their songs on reverbnation.com. They also have a Facebook, Myspace and Twitter pages.  These pages let fans know when they have new shows.  They might have some more shows later this year, but they want to write new material for the band. If they do not have another show this year, they will be back in early 2014, but check their pages for the latest news on what they are doing.

Recently, I went to a show and they sound better than before.  I have been to a number of their shows, but these shows over this past weekend were a lot harder than before.  They had the crowd getting involved in their set Friday night and the place was going crazy.  When Aaron was doing the vocals he was getting hardcore into it and even the band played off his energy.  They all brought out the best in each other, which made it for an amazing show. After their set was done I saw them walk off with so much energy because of how much more they got the crowd into it. This is a band that not just Topeka metal fans do not want to miss, but metal fans in general.  Their new sound is hardcore and on edge.