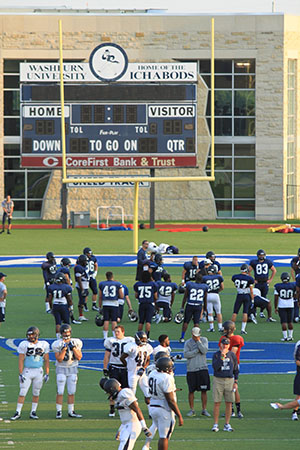 2012 File Photo. The Washburn Ichabods football team prepare for another season on the field.

Experience will be key for the Washburn Ichabod football team this year. With 16 of the 22 starters returning from the 2012 season, players believe that just having another year of growth under their belt will lead to yet another winning season. A 7-4 season last year was a slight let down after setting a school record for wins in 2011 at 10-3, but by no means a bad season.

The main reason for what struggles the team had last season was youth. This year the Ichabods’ offense looks to be based around their experience up front on the offensive line with four of the five starters returning. That protection should improve the scoring output for last year’s sixth ranked scoring offense. The new face to the offensive looks to be redshirt freshman Michael Miller. While the 6′ 5″ 285 pound youngster may be new to the starting lineup, he has some big expectations for the team.

“If we put it all together, be more physical and dominate in every aspect of the game, then yes we have a shot [to win a national title.],” said head coach Craig Schurig.

Last year the quarterback position was up for grabs all season as both juniors Mitch Buhler and Joel Piper split time under center. This year seems to be the same, but the early advantage seems to go to Buhler. Starting 10 games and playing in 15, he has passed for 1,904 yards and 17 touchdowns. He doesn’t seem to mind the competition and even says it’s good for the team as a whole.

“The good part about our team is we are deep at several positions. We have a lot of guys that can play, so I mean there’s competition for jobs everyday, and I think that’s a benefit for our team because everyone is pushing everyone to be better,” said Buhler.

The defense is also returning seven starters and looks for experience to play a key role in their improvement. They will look to improve on their sixth place ranking from last season and will need to do just that, as they will face stiff competition all season.

The MIAA has become one of, if not the strongest, division in all of division two sports. The preseason coaches’ poll put three teams into the top-25 in the country. 2009 National Champion Northwest Missouri State is ranked fourth, Missouri Western State is sixth, and 2011 National Champion Pitt State is 21st. The University of Central Missouri, Emporia State, and Washburn also received votes, but did not make it into the top-25.

The Ichabods open the season against the University of Nebraska at Kearney on Thursday, September 5th. Their home opener is Saturday, September 14th at Yager Stadium.