Ichabod given second chance, comes back for “Moore” 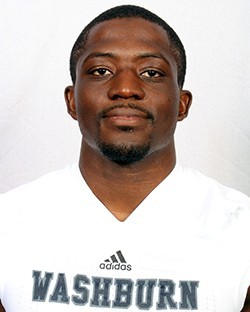 Vershon Moore, #29 for the Washburn Ichabods is back on the team after serving some time in jail.

DaJuan Beard will certainly improve the Ichabods offense this season after missing all of last season due to injury. The 2011 honorable mention all-American led the team with 1,029 receiving yards and 15 touchdowns. Most fans and students are expecting big things from him this season, and a vast improvement to the Ichabods’ meager 2,519 yards receiving last season.

What many fans and students aren’t aware of is the return of another former all-American player. Last season the Ichabods had 10 different rushers combine for 1,597 rushing yards. While that number is fairly impressive, the starting job was up for grabs all season and no one could ever really seize the spot. Redshirt freshman Donnie Lockhart started 6 games, rushing for 180 yards and looks to be a contributor again as a sophomore. Kameron Stewart, another redshirt freshman never got a start in the backfield but played in 9 of the team’s 11 games. He ran for 334 yards and 4 touchdowns, averaging 4.2 yards per carry. He also looks to get carries again this season. The team’s leading rusher in 2012, Hayden Groves is no longer with the team. He ran for 824 yards and 8 touchdowns, playing in all 11 games and starting 5.

The running game looks to get a boost as 2010 honorable mention all-American Vershon Moore makes his return to the team. As a redshirt freshman Moore mad the all-conference team rushing for 961 yards and 8 scores. As a sophomore he improved on those numbers, making the all-American team with 1,007 yards and scoring 78 total points, third most on the team. He is owner of two of the top three rushing performances in Washburn history with 227 yards against Truman State University and 218 against Colorado Mines.

With number like that it’s hard to believe that anyone would be against him rejoining the team. However, some are still questioning head coach Craig Schurig’s decision to allow it. In 2011 Moore was convicted of a bank robbery at Envista Credit Union in Topeka and sentenced to 30 months in prison. He was released this summer and is now enrolled at Washburn. Schurig says that it wasn’t only his decision to make.

“Obviously, it’s one your whole school makes,” Schurig said on ESPN 100.7 FM’s Local Show. “As a coach and knowing Vershon, he made a terrible mistake. But knowing him a little bit more than most people do, you just feel like that he’s a good kid and if he’s given a second chance he’ll take advantage of it. Our athletic director (Loren Ferre) is behind it, and he knows Vershon very well. Our president (Jerry Farley) has been very supportive. We just think he’s a young man who made a mistake and given a second chance, he’ll make good on that opportunity.”

His playing time will largely be based on his parole. It is undetermined if he will be able to travel with the team or only be able to play at home for now. Fans, coaches, and players alike will all be hoping that this was the right decision for, not only the football program, but the entire school. If this bold move does work out, expect big things for the Ichabod offense and Vershon Moore. The first chance to see him and the rest of the team play at Yager Stadium is September 14th against Fort Hays State.