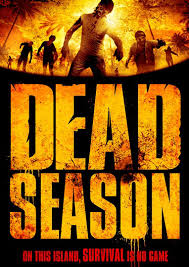 This reviewer gives this movie 3 and a half stars out of five.

Recently I find a movie on Netflix that was very interesting and it was called “Dead Season.” The movie takes place right after a zombie outbreak occurs and two survivors try to survive in this new world. The story follows Elvis who is played by Scott Peat, It also follows the other survivor that is with him named Tweeter who is played by Marissa Merrill. This two meet each other and then decide to try to survive together rather than on their own. They realize that they need to get somewhere safe and Elvis knows of a guy who can get them to a boat and take them to a remote island where they will be safe or so they think.

When the film is in night time shots there are some great camera angles and lighting during the night to make the story believable and brings out different emotions in the characters themselves. The music they use help intensify the action that was going on in the movie. Sometimes in the B-rated Horror movies the acting is not very good, but I will have to say this one did a good job of making it realistic. The movie was more of a thinker movie and not so much of just fighting zombies like most movies in this genre do.