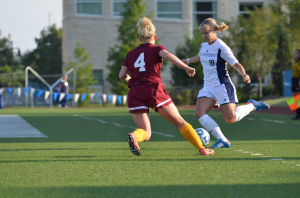 The Ichabod soccer team kicked off their season Friday night against Northern State University. Both teams came out ready to play.

The Ichabods could not capitalize on an early scoring opportunity. This proved crucial in the final outcome of the game. With 22:07 in the first half, Northern State scored the only goal to win 1-0.

The Ichabods recovered quickly though, as they had to play Wayne State College on Sunday. The best way to do that was with words of encouragement from Ichabod head coach, Tim Collins. Many emotions are going through a player’s head after a heartbreaking and close loss.

“Coach just said we have to be positive and capitalize on opportunities and well, we had a hard loss. We had encouragement and wanted a win,” said Whitney Skinner, sophomore forward.

Sunday’s game started the same way as Friday’s game with the Ichabods failing to score with an opportunity in the first minute of the game. That was the only similarity between the games. The team went on to win 5-0 for their first win of the season and accomplished something that’s rare for the team to do, a shutout.

“The team should be proud of a shut out because we only had one for the entire season last year, especially since we have out shot our opponents this year,” said Collins.

Shutouts are very hard to get and do not happen often, so when they occur it brings a sense of pride, not only for the team but also for the goalkeeper who stopped on-coming shots from going into the net.

“It felt good not to allow any goals because I haven’t had many opportunities to get a shutout early in my playing career,” said Tori Fuglister, junior goalkeeper.

A win means that the team is playing well together and can not only recognize opportunities but also take advantage of them.

“I’m just very happy and proud with this win and I hope that we can get more wins,” said Olivia Stovall, freshman forward.

After getting their first win of the season, the Ichabods still know that they have work to do and can still improve in order to reach their goals.

“The team still has a lot of room to grow, I’m happy with their play, but we should be 2-0,” said Collins.

During Sunday’s game, the Ichabods knew what had to be improved on from Friday and they did just that.

“We just had more attack opportunities and better position to score,” said Stovall.