Three up, three down 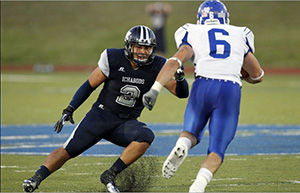 While the Ichabods will certainly take a win over Northeastern State and a 3-0 record, Saturday night’s game in Tahlequah, Okla. probably wasn’t what they were hoping for. The final scoreboard shows a blowout 48-3 win over the Riverhawks, but it wasn’t as pretty as it sounds.

The now 0-3 Riverhawks came into the game with their starting quarterback and running back out due to injury, and it showed. Their offense couldn’t move the ball all night, only mustering 159 total yards of offense. The Ichabod defense dominated the game for a third straight week and is now allowing just 11 points per game.

As good as the defense looked this week, the offense looked just as bad. Flashbacks of last season had to be creeping into the heads of the coaching staff, as the team’s struggle at quarterback seemed to rear its ugly head again. In the first two games, junior QB Mitch Buhler had looked strong, throwing for 545 yards and eight touchdowns while only throwing one interception. He seemed to be on track for an all-conference season, and still might be, but this week’s game was a big step backwards.

With just a 33 percent completion percentage and 168 yards, this game was easily Buhler’s worst game this year. He had two interceptions, which doubled his total for the season, but did manage to add a touchdown in the third quarter with a pass to senior tight end Tore’ Hurst. Backup QB Joel Piper didn’t fair any better in the time he saw, as he was just one of three passing for three yards. His one completion was a touchdown, but both of his incompletions were interceptions. He is now 9 of 15 on the season, with half of his incompletions being turnovers.

Special teams coordinator Jeff Schwinn should be proud of his guys. For the third week in a row his unit has played a major role in the win. With the offense struggling the most it has all season, the lift from the special teams and defense was much appreciated. While he did throw for one of the five Washburn interceptions, junior punter Aaron Hummert did pin the Riverhawks inside their own 20-yard line twice. Redshirt freshman kicker Justin Linn missed two field goals, but also made two more and sophomore Jaime Myers returned a punt 69 yards for a score.

The defense did more than its fair share of the work this week, forcing four turnovers of their own. Senior linebacker Bryce Atagi intercepted his second pass in as many weeks and led the team in tackles.

“I told the guys before the game that if I got another interception I was going to take it to the house,” Atagi said.

He did just that returning it 35 yards for the score. They held the Riverhawks to 106 yards through the air and just 53 yards on the ground. They have gotten better each week and are a large reason for the Ichabods’ staggering 160-33 scoring differential.

The biggest take away from this game may have been injuries. Starting running back, sophomore, Sean McPherson injured his knee early in the first half and did not return.

Head coach Craig Schurig said that he doesn’t believe the injury is serious, but the fact that he wasn’t the only player to injure their knee might be. In fact, he wasn’t the only player at his position to do so. His replacement, fellow sophomore Donnie Lockhart, also sustained a knee injury in the third after rushing for a team high 92 yards. Freshman tight end Raymond Solis was the third Ichabod to be taken off the field after having his knee looked at in the fourth quarter.

While they may be limping back from Tahlequah after this week’s game, and somehow managed to make a blowout look ugly, the 22nd ranked Ichabods are 3-0 and don’t play another team currently ranked inside the top-25 until November.

Next Saturday, they host the University of Central Oklahoma in a revenge game. Last year, the Bronchos upset the Bods 35-20 in Edmond, but this year they have to make the trip to Yager Stadium and are sporting a winless 0-3 record.