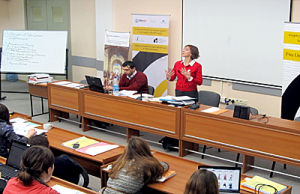 Washburn School of Law has been working with the Republic of Georgia to help bring their level of legal education up to American standards. With the help of a United States international development grant and qualified educators, the project is so far proving success.

When the Republic of Georgia gained independence from Soviet rule, they assumed western businesses would flock to invest in their now free country. Instead, businesses were hesitant because laws were vague and uncertain.

With Washburn’s presence, legal education is being enhanced as well as development of new laws. This includes laws regarding contracts and secure transactions. Western businesses are more positive about investing in the Republic of Georgia when laws are certain.

For example, when it comes to contracts, common terms need to be spoken. Romig stated that property rights needed to be built on a model providing predictability for a company wanting to go into Georgia and purchase land.

Washburn Law chose to partner with a law school in Tbilisi, which is the capital and largest city of Georgia. The partnership has continued now into its third year.

“We have sent at least 10 professors over to the Republic of Georgia for periods of up to two to three weeks,” said Romig, “to teach not only the students but more importantly to teach professors and practitioners legal methods and legal theory.”

And what started out as commercial law has broadened into other areas. Washburn Law now has a component that has allowed them to assist the Constitutional Court, the Republic of Georgia’s supreme court. Washburn Law students have helped with researching cases and writing briefs.

“Some of our student’s briefs have been argued before the constitutional court and some have won cases,” said Romig.

Although the students have not physically went to the Republic of Georgia, they have had video conferences with the Georgians where they discuss issues, US research, and provide briefs with comparable factual situations and resolutions.

“It’s been a great experience for the students and was very helpful to the Constitutional court of Georgia,” said Romig.

The grant may run out soon but Romig is hopeful that Washburn Law will be able to continue this partnership with the Republic of Georgia law school in the future.