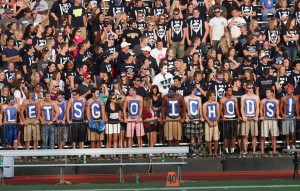 Sean McPherson and Vershon Moore carried most of the load and some short accurate passes from Mitch Buehler picked up a couple clutch first downs. A one handed grab on the sideline form junior wide out DaJuan Beard picked up the last Ichabod first down before they were forced to settle for a 38-yard field goal from kicker Justin Linn.

Following a shanked 25-yard field goal attempt from the Tigers, the Washburn offense picked up right where it left off. Strong running from Moore and McPherson ate up most of the clock in first quarter. Two big passes from Buehler, one 21-yarder to tight end Tore’ Hurst and a perfectly thrown fade pass to a diving Matt Kobbeman in the back of the end zone, had the Bods up 10-0 at the end of the first quarter.

After a first quarter that saw the Washburn offense on the field for most of the first 15 minutes, the second quarter started with a 16-yard Tiger touchdown pass from sophomore QB Treveon Albert to fellow sophomore tight end Zack Gaughan.

A big kick return to the Ichabod 40-yard line from Jaime Myers put the Bods back in business. Another methodical and balanced 6 minute 60-yard drive was capped off by a 7-yard touchdown pass from Buehler to Hurst in the back of the end zone.

The very first play of the following Tiger drive was a 45-yard pass from Albert to senior wide out, Tanner Hageman that looked to swing the momentum back in their direction. However, 3 incomplete passes and a run for no gain led to a turnover on downs with the ball on the Ichabod 30.

Washburn looked to capitalize on the gamble and did just that. After eating up more of the clock with a 10-play, 4-minute drive, Buhler and Beard made the Tigers pay for their mistake. A beautiful back shoulder throw and catch at the front pylon put the Ichabods up 24-7 with 3:46 remaining in the half.

A Fort Hays three and out led to the first punt of the game by either team. Once they had the ball, Buhler and the offense quickly turned it into points. A 49-yard bomb to sophomore wide out Jordan Hart was number 4 for Buhler in the first half – tying a school record for touchdown passes in a half set by former Harlon Hill finalist, Dane Simoneau. For Hart, it was his third score of over 45 yards in the last three weeks.

Looking at the first half of this game was like watching a completely different Ichabod team than last week. In week one, the Bods struggled to put together a sustained scoring drive, with big plays accounting for most of their points. With the exception of the last touchdown catch by Hart, every drive was methodical and sustained. The Bods owned the ball nearly 19 of the first 30 minutes.

The second half began with a Bryce Atagi interception on the fifth play of the Tigers’ drive. The Ichabods used a traditional sudden change big play to get them into the red zone. Another long Buehler pass to a wide-open Tyrell Brown set the offense up for another touchdown. This time Buehler handed it to McPherson three straight times until he finally got it in to put the Bods up 38-7 with 10:10 left in the third quarter.

The very first play of the ensuing Fort Hays drive was another interception by senior linebacker Isaac Wright, which he returned to the Tigers’ 15-yard line. Two plays later, Buehler threw his fifth score of the game, this time to sophomore wide receiver Connor Crimmins. Redshirt freshman Justin Linn missed his first kick of the season as his PAT attempt bounced off the right upright leaving the Washburn squad up 44-7 just 51 seconds after their previous score.

After a seven-play drive, the defense forced another Tiger punt. Two plays and 74 yards later the Ichabods’ offense was celebrating another touchdown. Moore accounted for all 74 yards, including the 65-yard sprint for the score, with 6:14 remaining in the third quarter.

Following a third interception from Albert by sophomore Jordan Nelson, Schurig sent in most of the second-string offense and defense. A 12-play drive, that ate five minutes off the clock, stalled at the Hays’ 28-yard line ended with a 45-yard field goal by Linn and the Bods with a 47-point lead.

Junior safety DeAnthony Rimmer accounted for the Ichabods’ forth total interception with 9:23 left in the 4th quarter, but the offense wasn’t able to capitalize on Albert’s final mistake of the game, going 3 and out. Fort Hays also put in their second unit on offense, and they took over at the Washburn 45 yard line. Sophomore backup quarterback Edin Kovac led the first scoring drive for the Tigers since the first quarter, going 4 for 5 for 17 yards and threw a 2-yard touchdown pass to senior wide receiver Keeton Callins.

With the Washburn offense just trying to run out the clock, went three and out one last time. Hays was able to tack on a field goal with just under a minute remaining making the final score 54-17. Next Saturday Washburn travels to Northeastern State to take on the Riverhawks.

Coach Schurig is excited about making the trip to Oklahoma saying, “It’s a tough place to play. They played us very hard up here. We’re anticipating a really tough game. We need to execute the way we did tonight, but really when we execute offensively and defensively we have a lot of talented kids that can get the job done.”