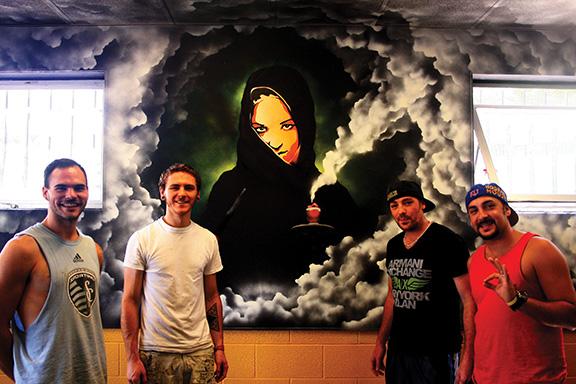 Artwork is displayed at a new local business, close to WU's campus. The grand opening for The Hookah House Topeka is Friday, Sept. 13.

On Friday, Sept. 13, a new business will open in the Washburn View shopping area. The Hookah House Topeka, owned by brothers Bassem and Hazem Chahine, will be open from noon to midnight, Sunday through Wednesday, as well as noon to 3:00 a.m. on Thursday through Saturday.

The brothers, whose family has been in the tobacco and hookah business for five generations, came to America in 2001, bringing their culture and the hookah with them.

Hazem Chahine, a Washburn graduate himself, described Hookah House Topeka and the hookah itself, as “an icebreaker.”

“There are a lot of nice bars in this city, but we’re more of a non-traditional hangout. We’re here for people who don’t want to go out to bars every night, people who just want to have a nice relaxing environment where they can study, chat, or even talk business if they want to. It’s [the hookah is] an icebreaker for a good conversation,” said H. Chahine.

Bassem Chahine picked up the explanation where his brother left off.

“It’s got more of a social aspect to it. You can come here before bars or after bars, if you want to sober up. It’s a really nice place to come and relax and be with your friends,” he said.

Scott Buckley, the manager of Hookah House Topeka said that student discounts would be offered to students with either a Washburn ID or a laptop.

“Students can just come and study and they’ll get a discount here. We’re just trying to be somewhere you can come and relax, chill, have a good, friendly, environment and enjoy some high-quality hookah,” he said.

Student specials will also be available, as well as daily specials.

Hookah House Topeka doesn’t just offer hookah. They also offer Arabic cuisine including bubble tea, hummus with pita bread and stuffed grape leaves, to name a few. The establishment will also host regular events including a DJ on Fridays and belly dancers every other Thursday. Special events are also in the works but have not yet been announced.

“When you come to Hookah House, you’ll see a world different from any other, our culture, Arabian culture, which has been lacking [in Topeka],” said H. Chahine. “No one seems to know how nice we, the Arabs, are. We want to show the public the other side of Arabian culture, that there are good Arabs and bad Arabs just like any other people,” he said.