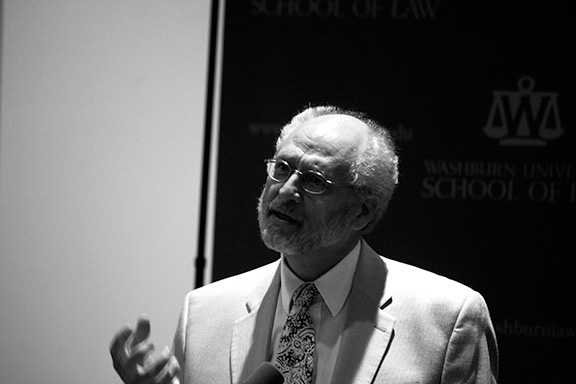 Sept. 17 Washburn campus saw the Bradbury Thompson Alumni center playing host to approximately 60 guests, including current students and alumni alike. The occasion was Constitution Day, a holiday celebrating the signing of the United States Constitution into law 226 years ago on the same day in 1787.

“The Gettysburg address is significant because it sort of laid out President Lincoln’s vision for changes that needed to be made to the Constitution,” said Rich. “I’ll be speaking about the events that led up to those changes and then I’ll be talking the aftermath and the extent to which the changes Lincoln might have envisioned that either took place or didn’t come about, both in the immediate aftermath of the Civil War, as well as in more current times.”

Shawn Leisinger, the executive director of the Centers for Excellence, as well as one of the organizers of the night, estimated the number of people to attend this year’s Constitution Day celebration.

Students looking to attend a Constitution Day celebration will be able to attend next year, as any college that receives federal funds is mandated to have a celebration in honor of Constitution Day and according to Leisinger, Washburn has been respecting that mandate since it was implemented 10 to 20 years ago.

In addition to the speech itself food and drinks were also available, including alcoholic beverages, one of the few times it is allowed on campus.