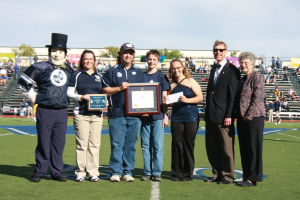 No rain will stand in the way of Washburn hosting Family Day in honor of Ichabod’s 215th birthday. Despite the weather conditions, a significant amount of people still showed up and participated in activities for the annual celebration.

“I’ve seen nothing but smiles on everybody’s faces and people are really excited to meet Ichabod,” said Jeremy Hoffman, social work major, who worked at the tattoo stand in the Memorial Union.

The public enjoyed the diversity of activities before the football game against the Central Oklahoma Bronchos at 2:37 p.m. at Yager Stadium. Families highlighted good food, good music, sales at the Ichabod Shop and the surprise birthday party. Ichabod received his own football jersey and the audience was treated to free cupcakes for the occasion.

“I love this celebration, because Washburn for me is one big family,” Joel Bluml, director of SRWC.

The carnival games in the Memorial Union became the center of attention.

“We are having a blast,” shared Dr. Michael McGuire, faculty member of the department of psychology, who brought his wife and four daughters to the event. “My kids can play and win prizes. They love it.”

In addition to the victory at the football game with the score 28-19, WU recognized the 2013 Washburn Honorary Family during halftime. This year, the award was proudly given to the Harry family for their continuous contribution to and involvement in Washburn University over the decades.

Krystal Harry, a junior studying music education, nominated her parents, Kevin and Stacey Harry, her grandparents, Dennis (now deceased) and Sharon Harry and her 15-year-old brother, Kristian Harry, who is planning on becoming an Ichabod in the future. Both of her parents and grandparents went to Washburn; three of them have received degrees.

“Krystal didn’t tell us about the nomination before she found out we were honored,” said Stacy and Steve Harry, dues-paid members of the Washburn Alumni Association.