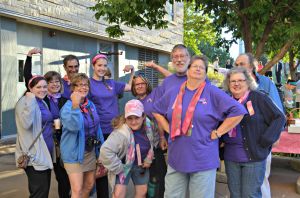 An estimated 2,000 people participated in the Race Against Breast Cancer’s (RABC) 22nd annual 5K race on Saturday, Sept 21. Each year, the event and the RABC organization raise money to provide free mammograms to citizens of Shawnee County and surrounding areas.

The race started and finished at the Washburn University Law School. It was scheduled to begin 9 a.m., but was delayed slightly due to a broken-down vehicle on the race course. The horn officially sounded around 9:20 a.m.

“The Race Against Breast Cancer helps to aid in the detection of breast cancer at its earliest stages,” said Dawn Robertson, RABC administrator. “This is our major fundraiser. This is where we get the majority of our funds to pay for breast cancer mammograms over the course of the next year.”

Many runners and walkers gathered early for the on-site registration, dove release and other pre-race events that began at 7 a.m.

The Mulvane/St. Francis Art and Wellness Class released the doves and also participated in the race as a team. They are a class of cancer survivors that have been together for seven years.

“It’s a really great group of friends that have become family,” said Jane Hanni, team captain and assistant curator of education at the Mulvane Art Museum. “Art and love. That’s what it’s about. Art and love.”

“It is truly a lifesaving event and we thank you so much for being a part of it, and we’re proud to be here,” he said.

Laurie Peterson participated in the race in honor of her mother who died of breast cancer. She was there as a member of the Mars Chocolate team.

“I thought, what better way to get my exercise in than with these lovely group of people,” she said.

Participants were able to register for the race up until it began. They had the option either of signing up early online or on-site the night before and morning of the race. Robertson estimated that about 300 of the participants in this race registered on-site. Team registration was $20 per member. The early registration fee for individual participants was $25 per person. The fee increased to $30 per person after September 12.

The RABC is a grassroots organization. They raise their own money and do not accept any outside federal or state government funding.

“Unlike a lot of traditional charity-care programs, we do cover people that have insurance. It’s just that they may be underinsured,” said Robertson. “Because we are self-funded we are able to pay for people who fall between the cracks. We don’t have to limit where those funds go.”

They are able to provide free mammograms to those in the community that quality by contracting with hospitals in the area. Robertson said they provide about 600 free mammograms each year and that they have paid for over 65,000 total mammograms in their 22 years. Total, almost half a million dollars has been raised. All of the money raised stays in northeast Kansas. Their goal for this event was to raise around $72,000.

More information about the 5K Event, the organization, and donation opportunities can be found at RABC Topeka.

“We really appreciate the support of our local community,” said Robertson. “Without the support of area businesses and individuals, we could not help the community like we do.”