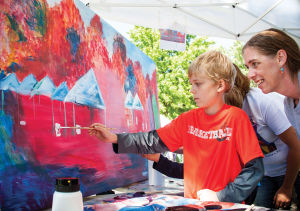 Aaron Douglas Art Park saw a large influx of people on Sept. 21, far more than it usually gets on an average day. The reason for this influx was the festivities that were a part of the eighth annual Aaron Douglas Art Fair. The fair had approximately 40 art vendors and around 10 tents where food was available for purchase from community organizations, as well as live music and activities for children and adults alike, including a community painting where people could add their own touches to an illustration of the fair.

The fair, which was held in honor of Aaron Douglas, a famous artist and Topeka citizen, plays host to many talented artists who work in a variety of mediums, including jewelry, sculpting, pencil sketches, marker-based illustrations, mixed media pieces, oil paintings, acrylic paintings, glasswork and photography. A few booths also featured many pieces using different art forms created by a group, or even the same person.

“All of my artwork is based on my belief in the Bible and my faith in Jesus Christ, and this piece is no different. It’s actually based on Ephesians, chapter four, verses four through six,” Mize said.

Mize also seemed to be enjoying himself at the fair itself. “It’s terrific! We’ve got great weather, beautiful music, and I can’t complain about the location, it brings a lot of good traffic. It’s just been fantastic,” Mize said.

Mize’s featured piece was raffled off at the end of the day, and the proceeds would go to Trash Mountain Project, a Topeka based international non-profit organization that helps families in garbage dump communities.

Former Washburn student, Eleanor Heimbaugh also attended the fair this year and opened her own booth featuring a multitude of hand-thrown, hand-painted clay mugs and cups that are microwave and dishwasher safe. Heimbaugh graduated with a bachelor of fine arts degree in spring of 2013. A four-year member of the Washburn Art Student Association (WASA), this year Heimbaugh was no longer eligible to participate in their booth.

“It’s a great event, I’ll definitely be back next year,” said Heimbaugh.

Asha Slack, a senior bachelor of fine arts student and member of WASA, was also in attendance at the event, working the WASA booth. Art on display from students included oil paintings and photography and featured students like Slack herself and another student at the event, Julian Jenkins.

“I’m enjoying the fair very much, and will more than likely definitely be here next year,” said Slack.