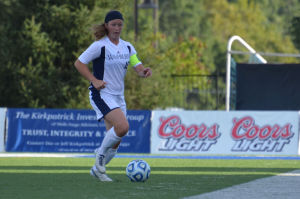 This past week the Ichabods had a daunting task ahead of them has they started a three game stretch.  On Wednesday, the team played at Rock Hurst University.  They eventually lost that game 2-1.

“We have to capitalize on the opportunities we have and continue to stay positive,” said Whitney Skinner, sophomore forward.

Friday’s game versus Augustana University was a thrilling and exciting game. Each team had plenty of opportunities to score but at the end of regulation time the score was tied at zero.

In soccer a draw is declared after two ten minutes over time periods. The teams played to a tie in the first overtime and nearly played to a draw, but in the final minute of double overtime Augustana netted a goal to beat the Ichabods 1-0.

Going into Sunday’s game, this could be used as either motivation or as a heartbreaking loss that could ruin an entire season.

“The loss on Friday could have been seen as devastating but that’s soccer and we know we have a good team,” said Tim Collins, head coach.

The team used Friday’s loss as a way to overcome adversity versus Colorado Christian. The Ichabods broke the scoreless ties when Devon Schmitz, freshman midfielder, scored from ten yards out.

The second half started off fast as Kate Combs, freshman defender, netted an eight yard score with an assist from Schmitz in the first minute of the half. This was the team’s third goal in a span of eight minutes. The offense wasn’t only on fire, but so was the defense as Tori Fuglister, junior goalkeeper, got her fifth career shutout and the team got their second shutout on this season.

“Shutouts mean a lot since those opportunities do not come up that often,” said Fuglister.

Ending the week on a high note was exactly what the team needed as they look to start conference play this Friday at Emporia State. Going into the game, the Ichabods have the better record 2-3 compare to Emporia State 1-3.

“It’s nice having a positive result going into our first conference game, but we have to be on our game because they are always strong at home,” said Collins.