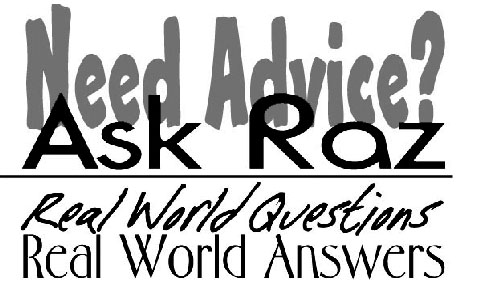 If you would like Raz's advice, email your question to [email protected] Look for this column every week for your answer.

When is it okay to “agree to disagree” in relationships?

Well, let me start by saying that there is a certain amount of “rightness” that we have as individuals in relationships. We LOVE to be right. We have to be right. Being “right” drives every argument and every disagreement on the planet. Now, let me explain what I mean by that. Have you ever noticed in arguments that the conversation tends to go through conflict until someone eventually says, “You’re right,” or the argument is ended in concession that you “agree to disagree”?

In this state, there is a power struggle at play, and it’s principally done through communication (or lack thereof). On the flip side, when we “agree to disagree,” there is a stalemate of “winning,” and people inevitably wander off to their friends and relatives to get agreement. One way or the other, people leave disagreements feeling as though they were right, the other person was wrong, and they’re going to tell the whole world about it.

Now this is not gender specific. When humans feel “right” enough, male or female, they’ll go to wherever lengths they have to until their “rightness” is satisfied. That’s why you go talk with your best friend, mother, sister, cousin, co-worker, whomever, until you’ve reached a satisfactory level of “being correct.” The “best part” to that is that we carry around that “rightness” into every other conversation until that part of ourselves is satiated. We have to be right! We live in a constant reactionary state!

The issue with this way of thinking is that we never actually HEAR each other. A good friend of mine said, “Communication may be happening, but no understanding is there.” There is a two-level effect to this. Communication is in part listening, and in part understanding. Have you ever noticed that people can say something to you and you leave the conversation completely oblivious to what just happened? Or have you noticed that you’ll say things to people and then ask them about it later and they don’t remember?

Humans are continually keyed into the channel called, “HITRTM 92.7FM.” Meaning: “How Is This Related To Me?!” We filter everything we hear through whether or not it is important to us, which is why when your mother is trying to tell you something about doing something, you hear very little of it until it actually interests you. The same thing happens with bosses, girlfriends, boyfriends, husbands, wives, whatever. We have working relationships that are always 100% about us. We just won’t admit that we’re selfish people. So here is the thing:

When is it okay to agree to disagree? That’s on you. However, if you want to actually communicate with someone, apply the listening AND understanding part. If you’re unclear, ask people to clarify. If you’re speaking, ask people what they heard. If you’re in an argument, a great trick is to say, “Okay, so I heard you say X, Y, Z, and what I thought about that was W, V, U, so did I hear you correctly?”

Try it out the next time someone is in dispute with you, and see if you’re actually hearing them at all. When understanding is applied, then communication is now possible.