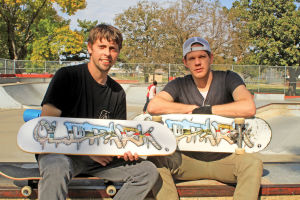 For local skateboarder Mike Mendes, skateboarding is more than a sport, it’s his life.

And after skateboarding for 18 years, he wants to share his experience with others through his own skateboard company.

“One day I had an extra board with me in the trunk and someone said ‘Hey, can I get that off you?’ and it spurred an idea and grew the concept of bringing boards here regularly, and from that the idea to start our own board company and really bring up skateboarding in Topeka,” said Mendes.

Mendes has been bringing boards to the Topeka area from his friends’ company, The Obtuse Concept, for the last six months, and recently released a collaboration board with the Obtuse Concept for his company, Full Intent Skateboarding.

“I came up with the idea of creating Full Intent Skateboarding, and that’s what it’s about now,” said Mendes. “So I’m working together with my good friend Tim Hutton, who is my designer and artist.”

Hutton, who is a skateboarder, artist and Washburn graduate, shares the same ideas and vision as his partner.

“We don’t really have a local skate shop here in town,” said Hutton. “We have some corporate stuff in the mall but he really just wants to bring the community together in a positive way, and I admire that and I just want to help him accomplish that goal.”

Hutton was given the assignment to create the first graphic for the Full Intent Skateboarding/Obtuse Concept collaboration, and will continue designing boards in the future. The graphic depicts the Mousetrap Skate Park, which is known by locals as “Old Park.”

The idea has developed a big response with the locals, and Mendes, who currently sells his merchandise from his vehicle, sells the boards at the park with grip tape for $45.

“We’re focused on the things skateboarders really need to skate,” said Mendes. “Not just a wall full of T-shirts or a backstop of shoes or something like that all about the boards and Full Intent Skateboarding [sic] and to make it possible for young skateboarders to grow and progress, and for older skateboarders to continue skateboarding.”

When naming the project, Mendes wanted to have something that reflected skateboarding and what it means to him.