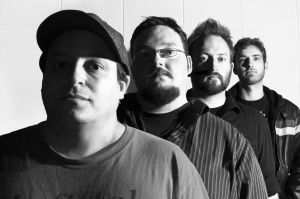 This past weekend the Dead Sevens were in Topeka at the Riverfront Station to release their second studio album called, “Rule My World.” The band is made up of Doug Griffin (vocals/guitar), Chuck Mioni (lead guitar), Jesse Ells (vocals/bass), and David Morse (drums).

Their concert this weekend was put on in celebration of the album. This was a great show to attend because as I listened to the band play, I noticed many genres in their songs. This is good because bands with a variety of genres appeal to a wider range of fans. The show had a nice turn out and was amazing.

The opening act featured Chris Aytes & The Good Ambition, which is made up of Chris Aytes (vocals/guitar), Renelle Aytes (drums), and Josh Hartranft (vocals/bass). They prepared the crowd for Dead Sevens went on after them. They played several songs from both of their CD’s performing.

Dead Sevens’ honorary member, Krystal Marie, play a couple songs with the band because she has known them for a long time. The venue, which they have never played at before, made it even more unique for the release of the album.

“We are very excited and didn’t know at first if we would be able to get it done, but now that it is here it is very exciting,” said Ells.

Ells also said they hope to be on the radio in the next five years.

Their second album, “Rule My World,” has a great sound and I noticed there were many different genres on the CD. I definitely heard some alternative rock sound to the album. The songs have an up beat tempo to them, which makes it a joy to listen to. It is a CD that can expand their fan based. Both albums are fantastic. I cannot choose between them, but I would give both albums five out of five stars because of their uniqueness.

Dead Sevens fans who want to know where the band is playing next can go to facebook.com/deadsevens.

“Our next show is at the Granada in Lawrence, Kan. for a Battle of the Bands competition on Nov. 17,” said Griffin.

If fans also want to buy any of their songs, they can go to reverbnation.com/deadsevens. Dead Sevens is a band worth seeing in person, so go check them out. They are great to see live.