16th Annual “Silents in the Cathedral” 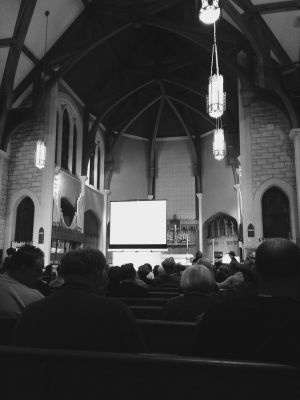 Friday, October 25, the Topeka and Shawnee County Public Library celebrated their 16th annual “Silents in the Cathedral” by presenting the original 1923 classic of  “The Hunchback of Notre Dame.”

Over 400 people gathered at the free event at Grace Episcopal Cathedral which was sponsored by the Topeka and Shawnee County Public Library with the cooperation of the Kansas Silent Film Festival.

It tells the dramatic story of the beautiful gypsy dancer Esmeralda, and the deformed bell-ringer, Quasimodo.

As the sanctuary filled, people patiently waited, talking with neighbors, buying refreshments and looking at fliers for the upcoming film festival.

The event began with Steve Burton, music director of the Grace Cathedral, speaking briefly of concerts and events coming up at the church. He then introduced Charity Rouse who recognized Dr. Marvin Faulwell (organist), Bob Keckeisen (percussion and sounds effects), and Bill Shaffer (projectionist).

“We are always delighted to team up with a stellar cast each year for the Silents in the Cathedral,” Rouse said.

Denise Morrison added her welcome and set the scene for the films. She discussed the two short clips “The Thieving Hand,” (1908) and “Felix-The Ghost Breaker” (1923) that were being shown before the featured film.

She mentioned “The Hunchback of Notre Dame” was also shown in their 3rd year but with new digital technology this time, it was brought back better.

“I think if you were here 14 years ago for Hunchback and you remember that print versus this you’ll be amazed at the difference. We’re very happy to be bringing it back the second time almost a different version,” Morrison said.

The Grace Cathedral group sold popcorn and water before the presentation and during intermission.

It was a fun night. I’d never seen a silent black and white film before so it was interesting to see the difference in how movies were made back then compared to now. They are entirely different compared to the ones today especially in the area of how much the viewer has to think. I never thought about how much reading was required. Also the music and sound effects were performed live. It was definitely a learning experience.

The next Kansas Silent Film Festival begins Friday evening, February 28, 2014 from 7 pm to 10 pm and continues all day Saturday, March 1, 2014 from 10 am to 10 pm. The free event will be held at White Concert Hall on the Washburn University campus.

To read more about this event visit: