Leadership key to victory for the Ichabods 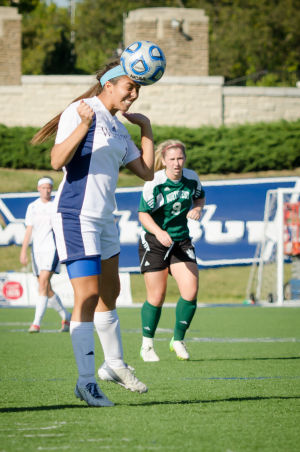 Friday night the Ichabods took on Missouri Western. Caysie Beetley, senior forward, scored the only goal of the night. But the 1-0 lead was wiped out by mother nature causing the game to be rescheduled. The game restarted from scratch. This caused disappointment not only to the players but also the coaches.

“No one can predict what the weather will do, but it just shows the resilience that the team has because we know we can score on them, but now, we just have to go out and play 90 minute game instead of a 45 minute game,” said Tim Collins, head coach.

Going into the rematch, both teams knew what the other team would be capable of. Making the proper adjustments would be a key to winning the game.

“Friday was frustrating and I was mad because we were holding the other team and we had the lead,” said Kate Combs, freshman defender.

The team was back in action Sunday against Northwest Missouri State where they extended a four-game-win streak by winning 3-0.

As the season goes on, teams has built better bonds, allowing them to communicate on the field and get much-needed wins.

“Well, we have good off-field chemistry this year and have had better on-field chemistry which has caused us to get more shots that were on goal,” said Tori Fuglister, junior goalkeeper.

It is important for leadership to develop and many of those leaders are seniors who have had experience playing. It is also important for freshmen to gain confidence and mature faster.

“Playing with older girls help the freshmen get stronger and we play harder after seeing how much dedication the seniors have,” said Combs.

With the end of the season coming up, teams often find themselves looking to postseason tournaments. Teams first look towards the conference tournament, which is followed by the NCAA tournament. Some teams know they still have an uphill battle to qualify for these tournaments and learn how to make the proper adjustments to win.

“Our original goal was to win 12 games, but now we just want to make it about making it to the conference tournament but more importantly we want to have a winning season,” said Collins.