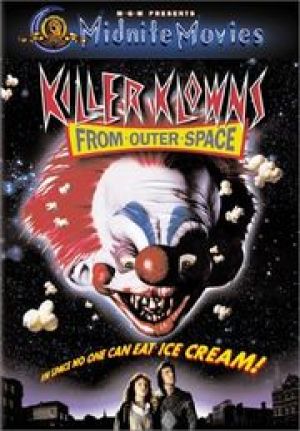 It is officially October now and that means it is time for horror movies to be the main attraction for classic films for movie buffs to watch. I was on Netflix looking for a horror movie and I found a classic named “Killer Klowns from Outer Space.”

The movie is about alien clowns that come from outer space and attack the residents of a small town. The story follows the character Mike Tobacco, played by Grant Crammer, with his girlfriend, Debbie Stone, played by Suzanne Snyder.

While they are out on a date, they see something that looks like a shooting star. When it lands, they go to investigate. Surprisingly they get to the area they see a big circus tent, but it is not what it appears to be. It turns out to be an alien spaceship with clowns on it.

The thing I really enjoyed in this movie was its special effects. Even though it was made in the ‘80s the effects were done really well. During one scene, the clowns do shadow puppets for some of the town people. What makes it a great special effect is that the shadows the clown makes are things that no one can imitate in real life. For example, a T-Rex shadow puppet comes off the wall and eats the town people, turning them into popcorn. It is creative for the time period.

Another scene I really liked for special effects was a scene with five clowns throwing acid pies at a cop who starts to melt instantly as the pies land on him. Once he is melted they put a cherry on top just for fun. It makes me laugh because the clowns are supposed to be scary, but they have a fun twisted humor to them that makes it great to watch.

I also enjoyed the music selection in the movie because it was creepy and it fit how scary the clowns looked when they came face to face with some of the town’s people.

This is of those movies that a joy for me to watch because of the cheesy horror film that it is. I would put this in the categories of horror movies that are a cult classic because it doesn’t fit the norm of the Horror movies that I usually watch and that is why I like it.

Netflix users give “Killer Klowns from outer space” 2.9 out of 5 stars. My Netflix rating for this movie would be 5 out of 5 stars, but don’t take my word for it and check it out.